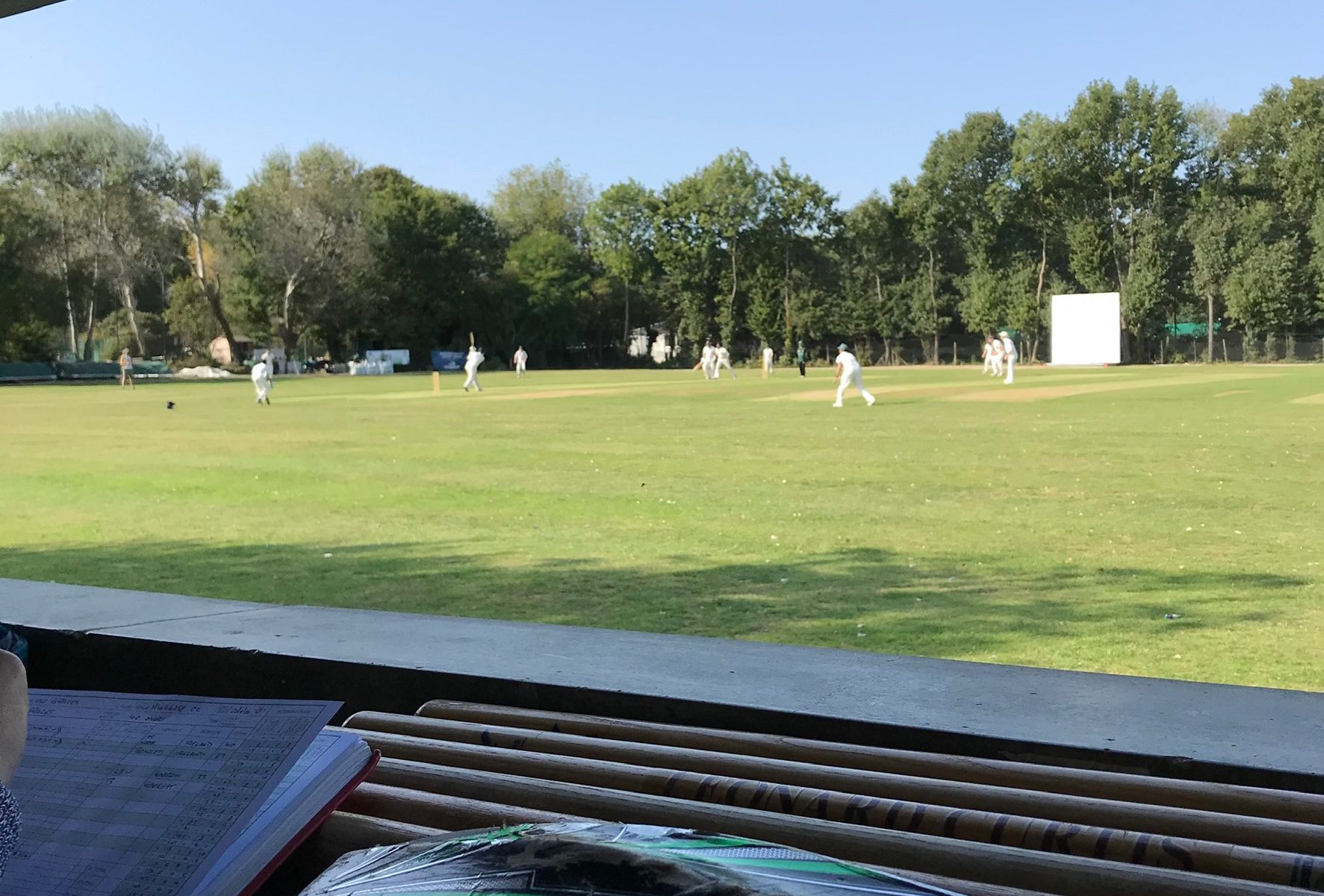 Thanks to Adam for the match report;

No Pacific blues for Graces…

The 20th of September saw us wake up to another absolute beaut of a late summer Sunday as the Graces players & fans headed up to leafy North London. A slightly earlier start to allow for any potential light issues but not before the conclusion of a morning colts match, complete with some impressive fielding; the standard had been set!

With some key players taking part in a GLTA tennis tournament south of the river it was again a slightly different looking line up, but this presented an opportunity for Matt from Barton Seagrave to don his Graces jersey once again along with Archie Stroud, making his debut. Jim and Darren were also welcomed back having featured against Winchmore Hill.

With the pitch looking good and the sun beating down there was only one thing to do; so what do you do if you need a toss won? You send Manish of course; Graces would bat first.

Archie and Matt it would be to open up and bar a couple of early scares (Matt put down without scoring and a big appeal for Archie caught behind) they settled in quickly and looked to take advantage of some short boundaries. The Pacific openers bowled really well in the heat but ultimately toiled away without luck or success and it wasn’t long before Archie had brought up his half century with a fine strike to the boundary. Matt was offering fine support and the pair brought up their hundred partnership in the 16th over.

Having just survived a drop by the young keeper Matt was eventually out caught behind for 40 and Jesant joined Archie with the score on 113-1 in the 18th over. Jesant played himself in as Archie continued to take the attack to the bowlers and after a flurry of boundaries he was bowled coming down the wicket for a classy 67, 56 of which were strikes to the boundary.

Stu joined Jesant in the middle and continued his recent good form as a flowing partnership developed moving the score to 170-2 in the 27th over. Stu fell victim to the slow off spin of Pacific captain for the day Tim Garrett (lbw for 33) and after Jim was bowled by Garrett for 3, Jesant went the same way for 27.

It was a fine spell from Garrett (4-46), which on another day might have sparked a collapse, but tidy cameos from Dom and Manish moved Graces on to a fine total of 246-7 from their 40 overs. A big score but with fine conditions and short boundaries nothing could be taken for granted at the hallway stage.

Ari and Archie took the new Dukes for Graces and with Archie grabbing a plumb lbw in his first over and Ari taking 2 wickets in his 3rd it was one hell of a start as the opposition found themselves on 23-3 after 5 overs.

Thankfully for Pacific their fightback was led by chairman Toby Chasseaud who went about his business sensibly, building a solid partnership with Rahul at the other end. As their partnership passed 50, and the score 80, it took a fabulous caught and bowled by Jesant to make the breakthrough and put Pacific back in trouble at  83-5 in the 19th over.

In the remaining overs Pacific did their best to keep up with the required rate but with wickets falling at regular intervals they always looked like second favourites. Big hitter Rizwan Siddiqui played a stellar knock to keep them in the game but with 50 in his sights, and some squeaky bums in the field, he slapped a short of a length delivery from Jim to Ari in the covers who took a brilliant diving catch to end the match – Pacific all out for 222! It was a fitting way to end a great match of cricket and a fine fielding display from the whole team.

Three wickets a piece for Archie, Ari & Jesant who were the pick of the attack; congratulations in particular to Archie and Jim for their first Graces wickets; the first of many we hope!

As usual in this beautiful setting some drinks were enjoyed post match and it was great to see so many staying back to celebrate the performance. Next week looks likely to see us switch from beers to Bovril as we head to our friends at Barton Seagrave and an autumn weather front sweeps across the country; It won’t stop us, until then…

There is a path / narrow road opp Park Avenue South in Park Road on the left about 200 yards after the swimming pool when heading north. Take the path , on your right is North Middx Club on your left is Calthorpe. Keep to the path & go beyond the next ground on the left & the tennis courts on the right, then turn left toward yet more tennis courts.

The pavilion will be directly in front of you & Highgate’s ground on your right.