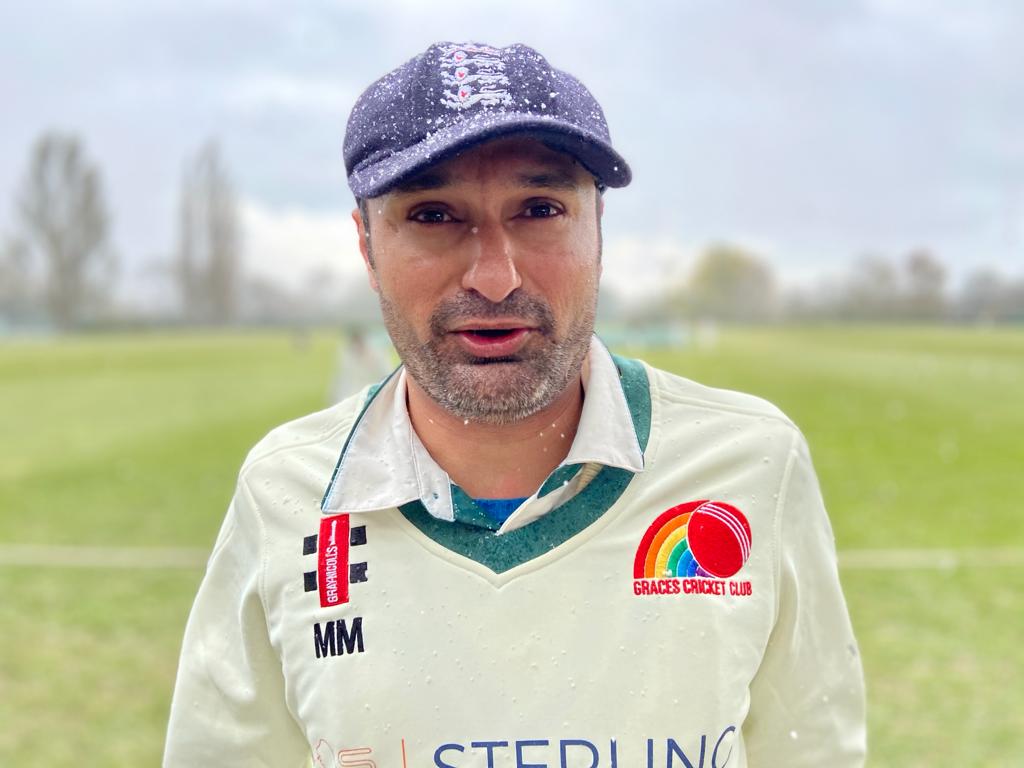 Many thanks to our scorer Colin for this match report from the arctic tundra of Broxbourne!

April this year is cold, very very cold but with the chance to start playing Cricket we had to give it at go.  Broxbourne, our main home ground, was our location for a first season friendly 40 over match away against Broxbourne. A trophy is involved, more later.

After a useful nets session, coached by Gags, we continued to start the game by batting in sunshine albeit with a chilly wind. Fantastic start as Archie Stroud slaughtered Grover with 23 as a first over. Stuart provided cover to keep Archie on strike before scandalously playing on in the 6th giving Connor Ridley first blood. 45 in the 6th was good though. Jesant played wisely and we reached 97 with his 20 before Start had him LBW with a high pitched shot swooping down toward wicket.

Mahi just didn’t settle today and was quite defensive though still two classy boundaries before caught at long on by Grandad Bailey.  Now we had Dom who virtually stayed the course as counterpart to Archie after 14 boundaries and excellent penetration in other strokes graciously retired at 103 with a well crafted knock. Leo replaced and went immediately to LBW against recent bowler Scibelli.

Close now to 200, Manish goes in with a mission to last out the game and keep strike rotating. An emphatic 4 stated his case but he started to run a lost cause and could not backtrack swiftly enough. Chris ran a couple well that halted before the rope but he was well caught behind by Captain and Wicketkeeper Liam Robinson. I don’t like score at 222 with the notion of three little ducks so Jim got off the mark to avoid a duck.  Pushing toward climax and maybe some swashbuckling from Mamun at 11 it was Dom who finally succumbed on last ball at 38 giving a potentially impressive 238 as score for 8 in almost three hours.

The break was not too long as the current regulation means eating individually and outside and it was cold, very very cold.   Stuart was delighted meanwhile that we had captured the first innings in broadcast mode on Play Cricket with IPad but with spectators not allowed there was no one to assist in keeping that updated for the fielding innings. As it was I was operating electronic scoreboard as well as marking scorebook so limits reached so far.

Chris opened our bowling with amazing economy and only White could score but 4 after 3 overs was a fierce attack ably supported by Mahender who had a wicket maiden removing Grover cleanly at no score. Preston dotted regularly but was still a duck in the 6th when Mahender caught and bowled a high ball response.

13 year old Grandson  Josh Rodman followed up lean and impressive bowling (28-1 off two spells making his 8 overs) with plucky shots and a defined style but Chris had him LBW with score now at 17/3. 6 0vers almost gone. Other opening bowler Connor Ridley came in to partner White and almost immediately the sky changed and we had a major sleet storm.  That forced the game to pause for 17 minutes with the square covered. We then played a more aggressive attack as they piled on 55 for the 4th wicket of White for 20, run out during Jim’s long bowling spell. Captain Liam replaces him. He beds in gently taking 22 balls for his first dozen while Ridley steps up a gear, 167 needed in 24 overs. Mamun in two spells, Manish, Archie and Jesant and returning Mahi all do their best to unseat the duo but to no avail. Adam had gloves throughout but no easy chances. There was occasional half chance but nothing to scream about and handling the icy ball was difficult. Extras were very well contained but the milestones piled up, 50, 100,150 partnerships, 50 for Liam and 100 for Connor.   If there had not been a significant target and some confidence in lower order perhaps the century would prompt a retiral but a win became distinctly possible and the pair kept at it. Soon after 7pm while Mamun had the 37th under control the tipping point was reached and Broxbourne were victorious.  Our bowlers had been steadily rebuffed with Mahender having best figure. 25/2 in his 8 despite a costly last over.

Ignoring the numbing cold, we had a few tins together outside suitably distanced as we play under ECB guidelines which includes a sanitisation of ball every six overs.  Broxbourne hope we will have a competitive game each season and had a trophy prepared which Chair Leo duly presented to Captain Liam and they in turn nominated Archie as Man of Match for his century and bowling. A bottle was welcomed.

We had no lack of application and there was not too much to learn from the game but we need other games to dislodge a solid middle order which we will do.  Perhaps we should have been batting more aggressively mid innings setting a less attainable target. Next week we host Village CC at Broxbourne in another friendly.  Hoping the air will be warmer then.