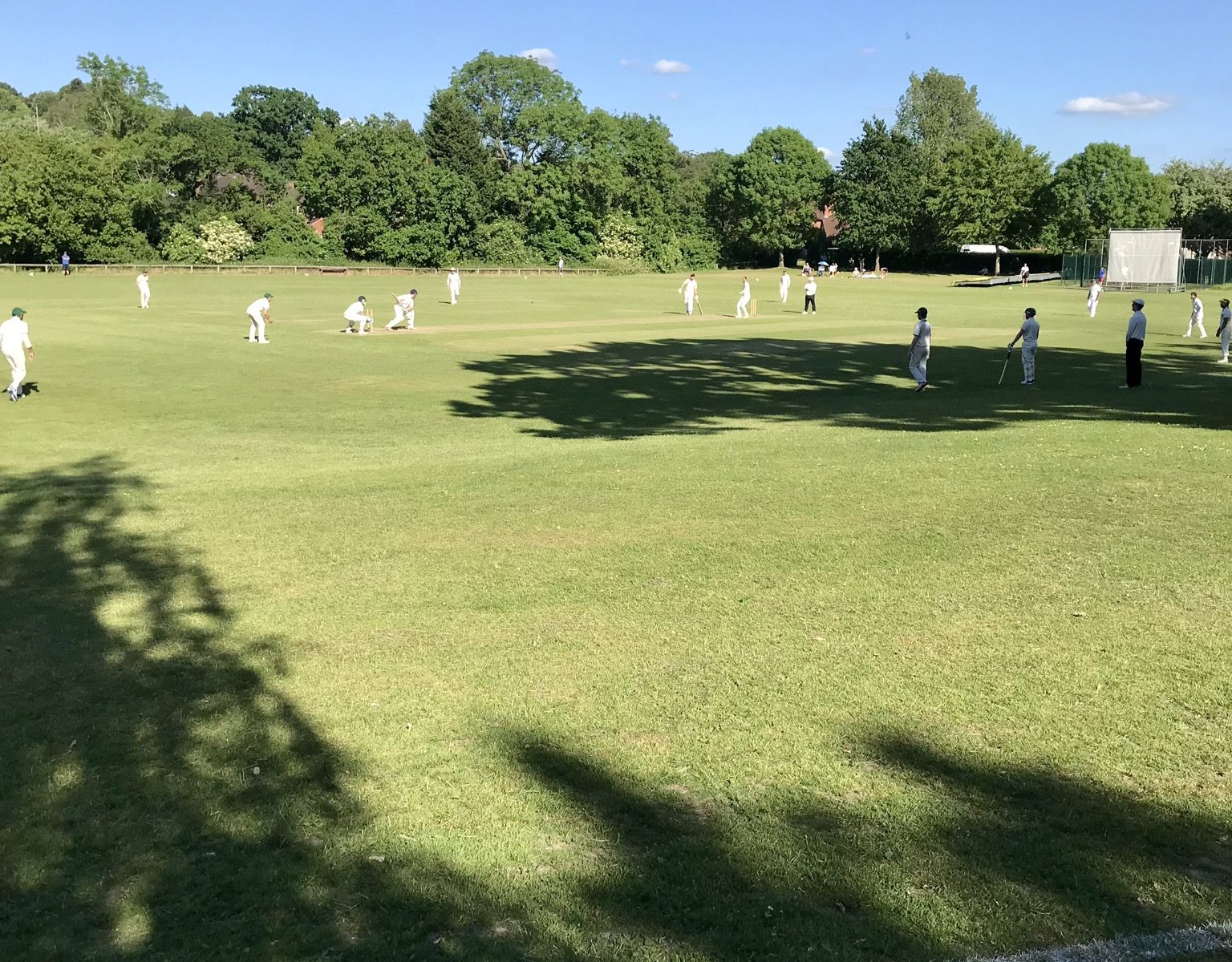 Here’s the match report for this momentous game courtesy of Leo the club chair;

And so, the day finally dawned – when we would eventually play THE game – a game with nearly 4 months of planning,  game that has captured such media interest. The first LGBTQ+ inclusive cricket match. After trying in late May – defeated by the worst May in meteorological history – we excitedly woke to blue skies and a forecast for the hottest day of the year.

With the toss won, Matt and Mahender strode out to bat – through a tunnel of Unicorns players – and with cameras clicking. We were on. Mahender as we know doesn’t hang around and pulled the first delivery for 4 through mid-wicket off Lachlan Smith. Thereafter the openers settled into a nice tempo and started to accumulate well – against Smith and Majunder – a mix of pace and spin – on a pitch that offered something for the bowlers. The score box ticked over and soon Graces brought up the 50 partnership – with Mahender dispatching Smith onto the pavilion roof. The very next ball however brough the Unicorns first wicket, as Mahender attempted an action replay but with the ball curving away to short third man where Hattie took a fantastic catch.

In came Jesant who looked to score quickly picking up 14 out of a second wicket stand of 22 before being caught pulling in the 14th over of Hallam – a left arm spinner who had replaced Majunder – and Graces were 73 for 2. The fall of the wicket brought in Nadeem – one of Graces’ founders and one of 2 in the team who had played in our very first game in 1997 – before some on this distribution list were even born! He was soon smartly caught by Smith at short mid-off as he looked to cut Hallam for 7. At the other end Matt had dropped anchor – and was smartly keeping out the good ball and punishing the bad one – though Long who had replaced Smith wasn’t offering many of those with his looping off breaks. In at 5 was Dom – enjoying a fine season with Middlesex over 50s or is that over 60s.

He brought some stability to the Graces middle order -and we broke for drinks at 20 overs at 102. The match was nicely poised. Thereafter Long and Hallam turned the screw – and we inched to 110 off 23 before Dom was lbw to Long for 13. Next was Leo – who looked to up the tempo – and he and Matt put on 31 in the next 4 overs with some nice drives and pulls – with Matt reaching a fine 50. Leo however soon holed out to long off for a rapid 14. To bring to the wicket Jonners – the second member of the team who had played our first game. Matt was starting to accelerate nicely now – frequently coming down the pitch to drive the spinners straight or ‘in the v’. Jonners offered positive support from the other end – including a remarkable pull shot played off one knee – batting aggression not seen since the early 2000s (so club historians tell me).

The Unicorns brought back their opening pair – and Majunder castled Jonners – for a useful 17 – with the score on 198 – with Matt having accelerated to 88 in the 36th. In strode Adam – in his semi-native Brum – there were very many Leydons in the crowd – and he supported Matt to bring up his magnificent 100. A fabulous innings – timed to perfection. Matt graciously retired to pick up all the well wishes that were streaming in from Barton Seagrave and the wider world. Matt’s retirement brought Ari to the wicket – and the tempo quickened again. How many would we get.

By this time crowds were flocking from nearby Edgbaston in search of a fine and balanced game of cricket after England’s abject defeat earlier in the day.

Singles were scampered and 2s were pushed. The final over brought an element of comedy and some farce with not 1 but 2 Graces batsmen being run out – including Adam for 6 and Manish for 0 – without evening facing a ball. Note to team – let’s revisit Yes, No and Wait at the next session… 227 was the final tally – which felt par or thereabouts.

We broke for tea and more media interviews (to note Manish now has an agent) – with the Weoley Hill bar and outside BBQ offering much needed sustenance for those toiling on the field, and the fabulous crowd. Inside the club house many had been watching a football match – not sure which one. Though as one Weoley Hill regular told me – he was watching the cricket on his phone – with the occasional glance at the TV for the football. A fine choice.

We took the field with 2 replacements – Stuart had agreed a playing squad of 13 – 11 to bat, with then 2 of those not to field – enabling 2 others to field and bowl – ensuring maximum participation. In keeping with his generous leadership, he was not down to bat.

Sam Schofield opened the bowling – founder of Proud Surrey – and recent hat-trick taker in his first Graces match down in Hampton Wick. Majunder set off in a hurry and clattered 13 off the first over -with a series of attractive drives through the offside. The next over went for 12 – off Ari – with a glorious straight 6. 25 in 2 overs – did we even have enough to make the drinks interval?

Things soon slowed down though – as Adam stood up to Sam – so Majunder couldn’t bat outside of his crease. Gillies at the other end had played with some circumspection – before being run out – a fine throw from Mahender on the cover boundary – and some confusion between the Unicorns opening pair. Gillies carried on running – off the pitch – at some speed and with some frustration into the club house where reports say various items of equipment may have been thrown. The Unicorns were 39 for 1 – a solid start. We rotated our bowling with Mahender and Manish coming on – to bring spin and control (and chat)– though Majunder continued to show flashes of aggression, and a couple of half chances.

Manish relatively soon had Hallam bowled – and the Unicorns were 71 for 2 in the 14th. Still very much on track. In came Buckle – and he started out very studiously – whilst Majunder continued to press. But after an over that went 6 then 4, he was expertly stumped by Adam – and several of us both celebrated and exhaled at the same time. It had been a fine knock – a quick fire 79. And Unicorns were 96 in the 19th. In came Ezra Stock – with a runner – having sustained an injury that morning. Buckle and Stock progressed slowly against the spinners who were showing expert control – with Manish finishing for 1-14 of 6 including 3 maidens, and Mahender 1-32 off 6. Next into the attack – for ‘just the one’ was Nadeem – comically coming off a long run – not seen since at least 2009 – to have Stock caught at first slip. Which brought in Hattie Wright.

At the other end Buckle was starting to accumulate. Jamie replaced Nadeem (who probably couldn’t physically have bowled another over of ‘pace’) and they were soon into a nice rhythm – getting some lovely swing from an ageing ball. Hattie demonstrated a great straight bat against Jamie and Jesant – before being lbw to Jamie – and the Unicorns were 134 for 5 off 32. The target was starting to look distant. Next in was Lachlan Smith, and Jamie soon had him clean bowled by one that looked to have swung back in. They were to finish with fine figures of 2-30 off 6. With Jesant getting plenty of spin and revs – and bowling a tight 4 overs for 11. Buckle was accelerating now – with some fine drives and pulls – and in came a very correct looking Glen Jackson.

Stuart was rotating the bowling now – and with some encouragement brought himself on. As we know he is forging a career as a bowler – and with the odd beamer aside – is usually quick and accurate. Nerves however seemed to take over – and ‘it took some time for him to find his line and length’. I can’t quite see from the scorebook how many balls were in the 33rd over – and Stuart’s first. In part as Colin chose an illuminous lime green pen for Stuart’s bowling stats, and in part as I am not sure the box for the over is quite large enough. I think there were probably 12 or 14 balls in it. Many of Graces started to recall our Portugal Tour where our illustrious skipper was banned from bowling after having bowled 2 waist high full tosses. Matt Ivory was more generous this time. And thanks to him and Rob Evans for standing through the heat.

The final few overs saw the Unicorns accelerate, Buckle bring up a fine 50, and Stuart slowly but surely finding his radar. His final and fourth over was his finest. Sam came back on from the other end – and the game ended with Unicorns with a very positive 189 for 6. A very fine game of cricket indeed. We had all had an absolute ball and will remember it for years to come.

As ever, Graces supporters were out in force. Pat and Duncan – making a ‘hat-trick’ of founders – including Nadeem. Ralph, Khin, and Percy – the latter making his annual cricket appearance. A couple of former players Nigel and Nick. Phil and Mamun – Mamun having graciously stepped out of playing selection to allow other to play. Essex Jim and his expectant wife Hazel, and a couple of their friends as well as Simon

A range of Leydon Uncles and Aunts. Stu’s dad, Laurie – our umpire on our international tours – but having to remain neutral even off the pitch – with Stu skippering Graces and Richie Andrews – his son-in-law playing for Unicorns. Tim – Chair of Broxbourne Cricket Club – our very fine ‘home’ came for the second half. Thanks also to Colin for scoring so diligently – and colourfully. And to Bob and Michael for bring the game to life with superb commentary on the live stream. And to Matt and Rob the umpires. And our thanks to Weoley Hill Cricket Club for a magnificent welcome.

Celebrations continued late into the evening – not the win – that was a mere detail – but about how fantastically well the day had gone, the creation of the Unicorns, and the world’s first LGBTQ+ cricket match ever. Conversations soon moved to what next – and with boundary murmurings of interest in the south-west and in the north – there will be plenty more chapters to come in ensuring the very fine of cricket is accessible to the LGBTQ+ community – be they players, potential players, supporters, or officials.