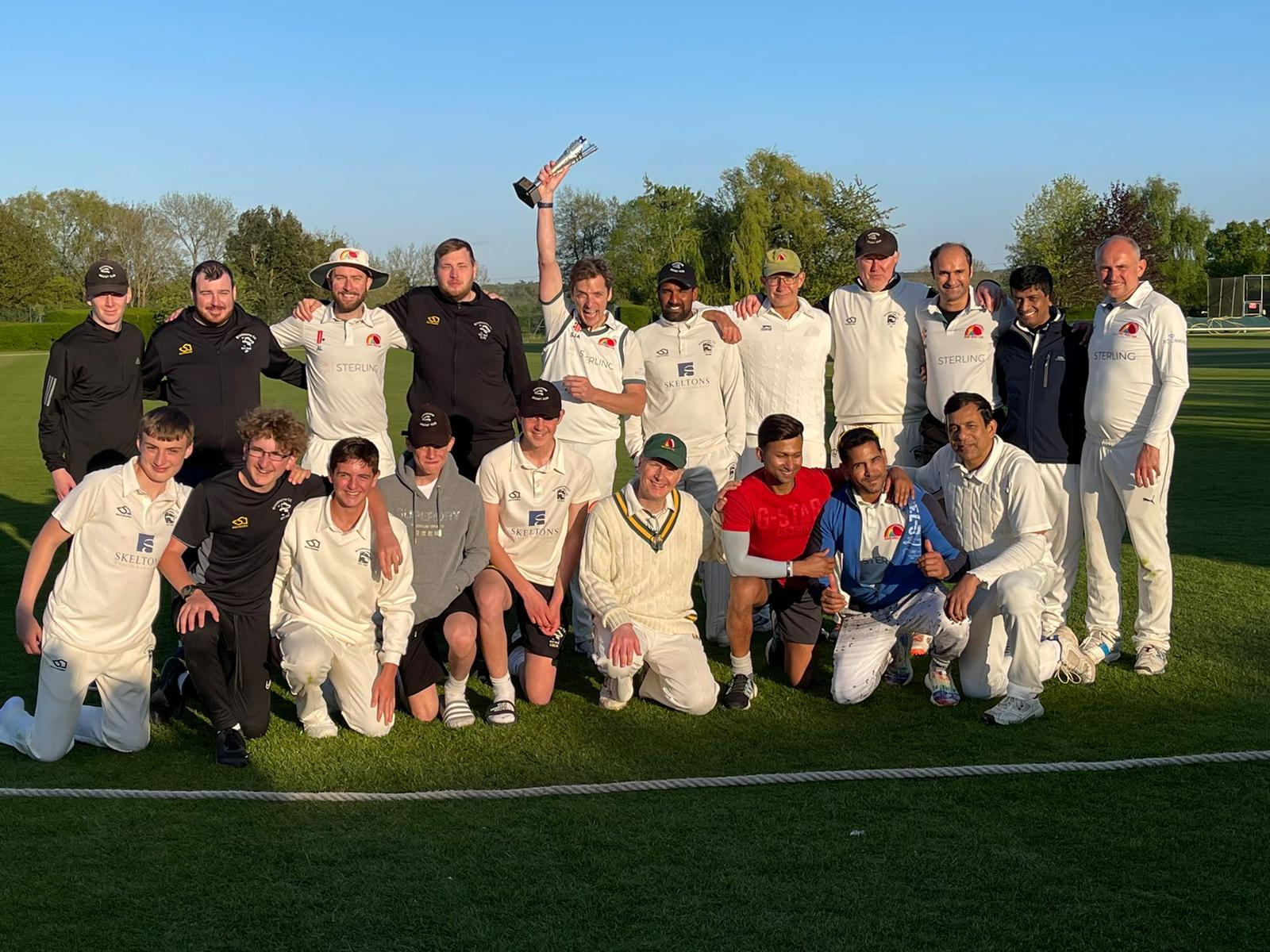 Broxbourne youngsters battle in vain to retain the trophy

Graces travelled to our home ground recalling it ended up snowing during the equivalent fixture last season when our hosts ended up winning despite Archie’s century.

Thankfully snow clouds were absent and it was sunny and about 17 degrees – still jumper weather though. As ever our loyal band of supporters joined us.

The toss won, Stuart elected to bat against a very youthful Broxbourne XI featuring our very own honorary Gracies Tim Pedlar , Gagan their coach , 2 players in their twenties plus 7 teenagers.

Mahender and Niroshan opened – Mahender was soon back in the pavilion bringing Mendis in at 3. These 2 patiently took the score to 69 facing some good accurate bowling from the teenage pace attack before Mendis was bowled for a stylish (as ever)  29 in the 17th over.

Comedy moment of our innings was when Stuart joined Ari at his end then managing to run all the way back to his end as the runout was somehow fumbled! Our skip had a bit of a charmed life as he was also dropped. He made the most of it sporting his new bat with some aggressive shots including a cover drive that pinged off the middle.

Our hosts used 8 bowlers – lots of talent on show.

Our tea had meanwhile ended up on the hard shoulder of the M25 as supporter Robert had puncture problems!

So a hungry Graces took to the field with guest bowler 14 year old Dylan from Broxbourne. The teenage top order struggled against some accurate swing bowling with wickets falling regularly – 50 for 6 off 18 overs. Simon picked up Tim’s prized wicket –  Some fine batting techniques were on display showing the value of good coaching. It wasn’t until the coach himself , Gagan , came in at 9 joining number 7 ,Patrick, that their innings picked up.

These 2 rattled the score along and victory was still possible for our hosts. Simon broke the partnership taking the important wicket of Patrick (27) – Jonno in at 10 showed himself to be a promising bat supporting his coach. However Gagan eventually ran out of partners, ending up top scoring with 37 not out. Broxbourne were all out for 133 in the 34th over. A win by 71 runs.

Some really good bowling for Graces today – Simon took 4 for 24 and our guest Dylan certainly enjoyed himself taking 3 for 17. Newton , Mendis and Manish picked up one each. Ari took 2 catches and (yours truly) Jonners surprised everyone by holding onto one too!

A really enjoyable match against our great hosts with some encouraging bowling and batting for the coming season. After the match Stuart was presented with the trophy – let’s see how long we can keep it!