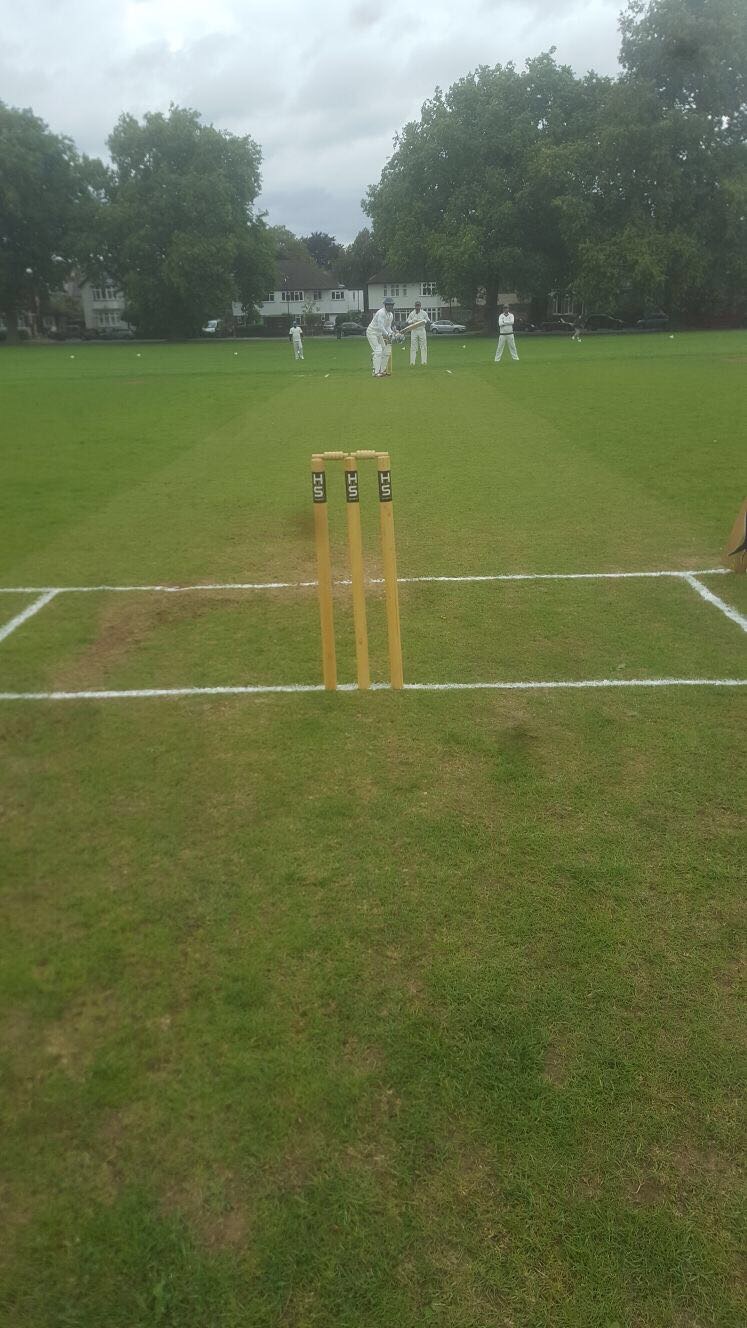 For the penultimate game of 2017 Graces made their way south to leafy Brockley to play a team we had first encountered in the indoor cricket league in Whitechapel.

On arrival some realised that we’d actually played at the host’s Hilly Fields ground a few seasons ago against the Hobgoblin Nomads and that there was a reason we hadn’t visited since – namely it’s a park ground with very limited facilities.

However Brockley are very friendly and hospitable hosts. Mahender won the toss and decided to bat on a very green pitch with an extremely lush outfield in a 35 over game.

Any idea that Brockley’s bowling attack would match the standard of their ground was dispelled as their openers produced some fine deliveries which tied down the normally attacking Newton. Interesting fact – Their opening bowler was Merlin , named after the famous Spitfire engine! Mamun pulled a nice 4 and then attempting the same shot was caught behind. Mahender in at 3 was soon bowled and when Mendis was edged to the keeper we were in trouble at 18 for 3 in the 6th over.

Although the wicket looked like a complete pudding it had some life with lots of bounce – our hosts told us they had to mark it and roll it themselves! Graces batsmen had to play very circumspectly as the change bowlers proved to be as accurate. In the 13th over Newton was caught for 4 with the score on 41. Niroshan joined Sam and both slowly accumulated with lots of dot balls as the bowlers gave very little away.

Niroshan was eventually run out for 20 bringing Neil in – the fact that he didn’t get off the mark until his 14th delivery says a lot about the difficulty in scoring. Sam’s marathon innings came to an end when he was bizarrely run out at the non-strikers end for 15. The bowler deflected a fizzing drive from Neil onto the stumps and Sam was stranded out of his crease!

The limited tea was consumed with the clouds looking threatening – some players regretted not packing their long sleeve jumpers. The last couple of Septembers have been really sunny , sadly not this season.

Our bowling attack took up where Brockley left off with Asad and Manish making the host’s batsmen work for everything. However they weren’t prepared to get bogged down and chanced their arms with some risky shots that they got away with until Manish took a nice catch in the outfield. The number 3 was in a rush and hit an entertaining 35 in no time at all taking the game away from us. Mahender eventually caught him but the damage had been done at 80 for 2.

The winning runs were hit with a few overs left despite another wicket falling , so a 7 wicket loss. Another 20 or 30 runs would have made it a lot more interesting. We can take some positives from the game as we bowled really well and never gave up.

As ever a big thank you to our supporters Phil , Tom & James with particular thanks to Marc for a long umpiring stint!

So next week sees our last game (weather permitting) with Graces returning south of the river to Norwood CC.

(Apologies but I’m not sure who sponsored the match ball)