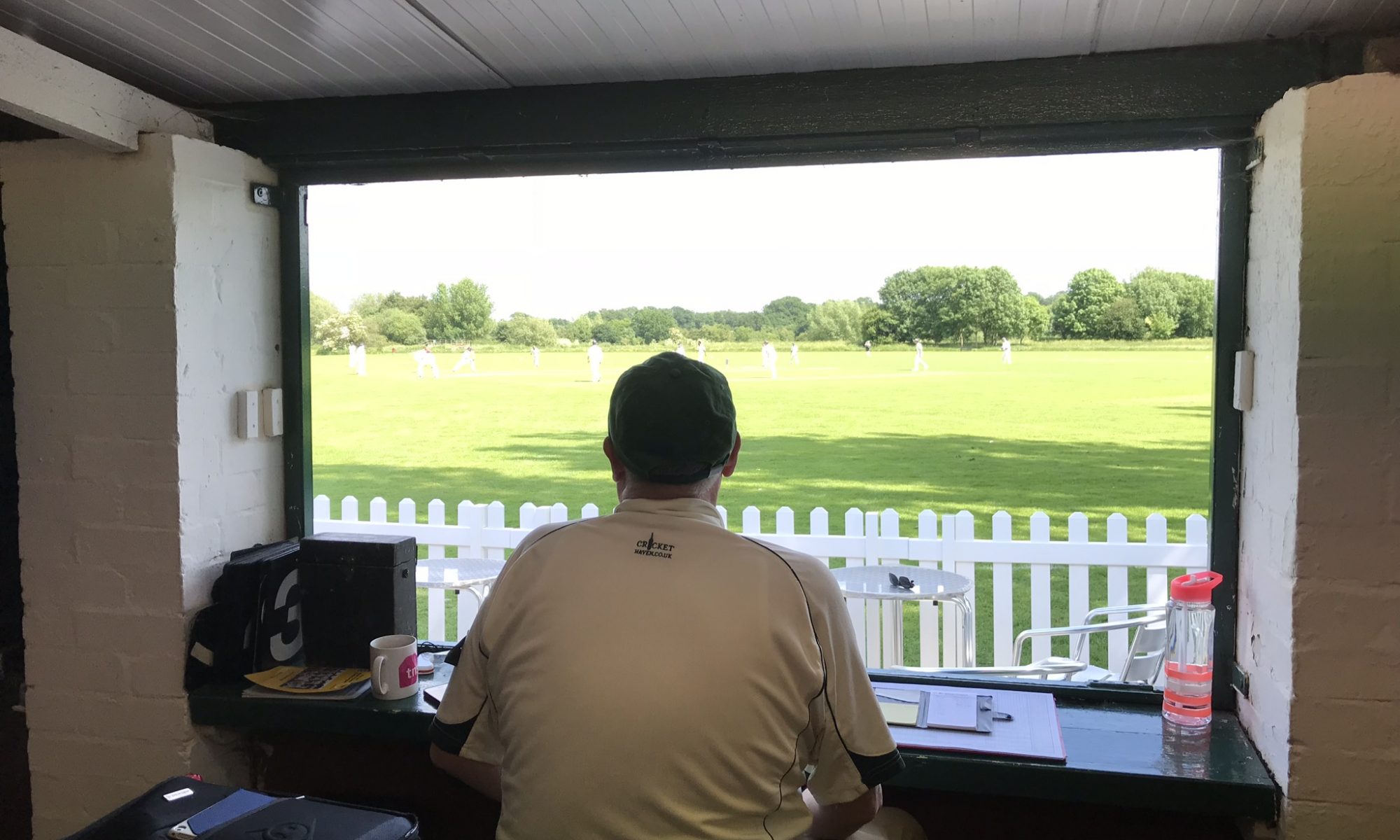 Another welcome visit to South Loughton and the parkland setting of this club. As ever we get a most friendly welcome and note the new removable barriers around the patio by the clubhouse. The club is always a mixture of the familiar and progressive so there were also bins for full separation of waste. Yet other favourites like the rotary wheels of the scoreboard are still present.

Ahmed won the toss for Loughton and elected to bat which suited Stuart who captained this match. There was some risk of rain today but generally any clouds were swift moving. Newton and Sanjeev opened our bowling against Billy Soomro (familiar from other teams?) and Zahid. Tight bowling to start from both with two maidens from Newton before Zahid spoiled by a quick 4 and 6 in the 5th. He countered this though by taking Soomro on the last ball of the 7th and Leo was safely present at Square Leg to dismiss him, still on a Duck!! Next in was Chugtai, also slow to gain any score.

A bowler change at 11th bringing in Mendis and Sam. Sanjeev was on 13 from his spell and Newton 21-1.  Mendis was incredibly tight throughout, more on that later. Adam was wicketkeeper today. Sam meanwhile bagged the wicket by bowling Zahid in his 2nd, the 14th. Zahid had just reached 30. In Sam’s next he then cleared out Chugtai for 13 by bowling clean again. Henman, not a player we have seen before, now joined Liam Hill. Mendis and Sam continued to bowl a full spell very economically, being only 57 when drinks taken at 20. It was Mendis who bowled Henman for 4, only two scoring shots, in the 23rd. Older player Pickston was the new man in who would take multiple overs just to reach 3. Leo was the change bowler together with a further spell from Sanjeev who now acquired 2-2 with 2 maidens in three overs. It was Sanjeev who bowled out Liam Hill for 32 in the 30th clearing the way for Lloyd Mann who had their best strike rate.  Dom had one over to clear the way for Newton to return to bowl the match out alongside Leo. It was Leo who saw out Pickston in the 37th who had just started running towards the end and now reached 12 neatly stumped by Adam. Last man in for them as it happened was Sam Hill who played with nothing to lose wrecking Newton’s earlier tally. He ended up with 31 and Lloyd 22 as the 40 overs ended and they had finally got to 154. That last 50 in half the time of the earlier runs.

As ever Tea is a marvellous spread here fortifying us for the innings ahead.

Today’s openers were Dom Scott, as in a pair not just a name. Bowling was Lloyd Mann and Foulser. Like the first innings, it was hard work making the runs with a combination each time of good fielding and a slow outfield generally after recent rains. There would only be one catch today with few dropped chances. Dom was our first casualty in the 7th, bowled by Lloyd and so Niroshan joined Scott for a tremendous partnership through to the 19th. Lloyd had bowled out 8-3-24-1 and it was now Sam Hill and the irrepressible Andy Battle who like Sam sent the balls with invitation but could be deadly if the shot not played. A slip up in communication meant that Niroshan was run out for 19 and so Mendis was next in. Henman got the all important wicket on his eighth ball, it being the 20th, with Foulser making a good catch past Point to remove Scott for 48 just as we were ready to applaud any next boundary with Adam safely seeing out the over before drinks.

Mendis had not yet opened up, despite his incredible bowling he had a few aches and pains and just when it seemed time to try and score he too was run out in the 22nd for a mere 5. Sanjeev now braced for a spell and he and Adam made a great secondary partnership right through to the target, reached in the last ball of the 36th leaving Adam on 22 and Sanjeev on 33 in their partnership unclosed of 62. While the game had started to seem not in doubt it was good to see the pair interact and communicate  and it was just a long time being padded up for Newton and Jonners in readiness.  Lloyd and Henman were the most economic bowlers for Loughton. Compared with our innings they were much more loose overall with extras and byes which if matching ours would have taken the game closer to the limit and they did drop several chances.  Sanjeev got the benefit of a wild overthrow from a shot only expecting a single. There was one absurd incident where a mother and pushchair blatantly walked across the field of play because it was easier to aim for a pathway she wanted despite plenty of alerts. Play over, it was time to relax and check on the ongoing game in Cricket World Cup.  Fewer supporters today with Jim and Anthony once again assisting with the scoreboard and Phil taking Photos. It is often surprising at many matches that home teams care little about updates and often prefer just to harvest figures after matches. Stuart meanwhile watches the board almost as keenly as watching for a catch.   I forgot to make a note at the time of the Man of the Match but it may have been Sanjeev for both disciplines with Scott and Mendis also highly commended. Would publish a correction if Stuart updates differently.   Meanwhile just why was Newton on the naughty bench in the pics? Was it a reflection on the last two of his overs?

Next reports will be from our back to back games last weekend against HSBC and then League and Hadley Wood Green.

With Jonners unconfirmed for this Sunday match at Broxbourne vs Mayfield in league, perhaps one of the team will make some notes and in any event as Home Captain Manish will publish the score by Monday evening. ( I am currently near Hamburg)