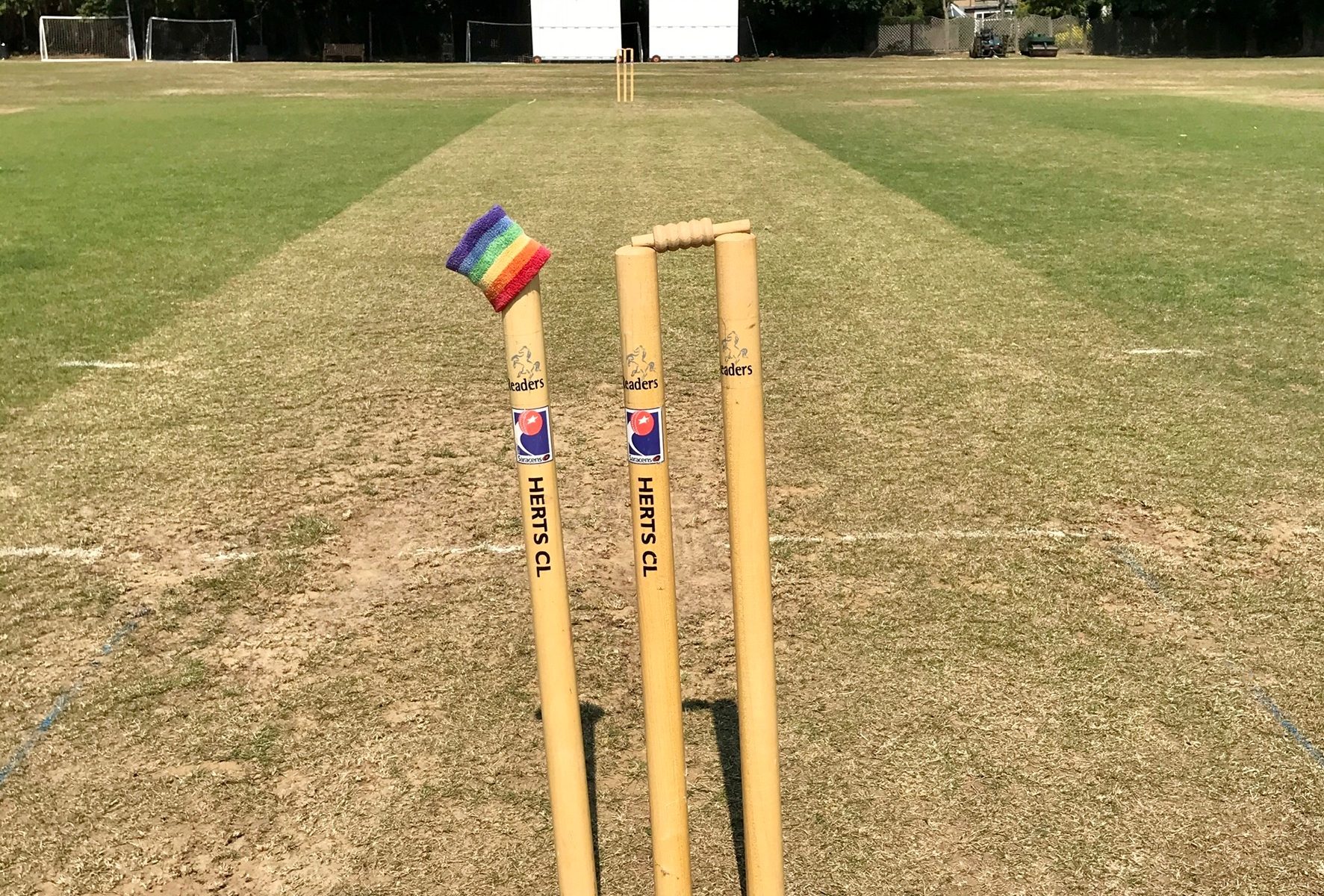 Away to Totteridge & Millhillians – 9th August 2020

Another glorious Sunday (30+ degrees!) saw us travel north to leafy N20. The Totteridge ground nestles nicely among some seriously expensive looking homes – the club’s car park reflected this featuring some posh cars including a Bentley and Porsche. Graces thinks this may have been our first match at this venue unless anyone knows otherwise!

We first played our hosts when they were Southlands CC quite a few seasons ago and chatting to their veteran skipper Clive discovered that they merged with Totteridge as Sundays were not utilised at this really cosy ground and they were struggling for numbers.

As ever we had a great turnout of supporters with Colin enjoying his scoring role. Chris Sherwood and blast from the past Aussie Jason Groves turned out as we have some injuries including Dom and Adam (who kindly came along to umpire again) Mendes played despite injuring his bowling hand playing for Old Wimbledonians the day before.

Thankfully unlike last week the home team had a wide age range with some seniors playing too!

A sigh of relief as Manish won the toss and we batted , Ari and Scotty immediately played positively on the flat surface against seam and spin. The total was 47 in the 11th over when Scotty mis-timed and was caught for an aggressive 21. Mahender came in at 3 – Ari perished LBW the very next ball trying a sweep (scoring 19) bringing Mendis in at 4. The hat-trick ball was survived. However the score had only moved on to 52 when Mendis swung at a wide one getting an edge that was well caught by a diving leg slip.

Drama as Stuart in at 5 was not happy with his batting helmet and took it off. Two balls later he promptly edged the ball onto his lower lip and retired hurt with an ice pack! Graces seem to remember him getting clobbered a few seasons ago in similar circumstances!

Jason Groves was in at 6 and hit a fine 4 before getting bowled. This brought newbie Adam Bray in at 7 – he went on the attack with some fine drives adding 56 with Mahender who continued his great form with some crunching shots. Adam was eventually stumped for an important 25. Our total was now 134 with ten overs left – Stuart had recovered sufficiently to return to bat – however he was soon LBW for a duck! (135 for 6)

Jonners at 8 hung around with Mahender who brought up yet another entertaining 50 in quick time. Jonners was LBW in the 27th over bringing our skipper in at number 9. Could we last the 35 overs? Last week we didn’t and paid for it!

30 was added before another LBW saw Manish return to the pavilion (actually a gazebo!) scoring 12. Chris Sherwood strode in at 10 and proceeded to ping it around with some lovely drives adding 30 in quick time. Mahender was stumped for a fab 74 in the penultimate over –  Mamun and Chris (20 not out) took our total to 215 as our overs were completed.

As the BYO tea was consumed Graces noted that like last week the outfield was super fast – anything wide of a fielder was 4 runs.

Chris and Ari opened our bowling against youngsters Umarr and Chaim. We experienced deja-vu as after 5 overs the hosts had raced to 54 , 19 year old Umarr taking a liking to the pace attack with a range of classy drives and cuts. Our skipper changed to spin and the run fest thankfully stopped with the batsmen having to work for their runs. Our first wicket came with the score at 72 in the 9th over. The batsmen had been a bit complacent with their running until Jason Groves hit the stumps with a fantastic direct hit from mid-off to run out Chaim for 21. Umarr had scored 48.

Number 3 , Tom , never looked comfortable until he was bowled by Mahender for a duck. Chad at 4 was also bowled by Mahender for 2 – 3 wickets down for 79 after 11 overs and Graces thought they were back in contention. Simon at 5 soon showed his talent with some classy drives taking the total to 122 in the 21st over before falling LBW for a nice 26. Umarr at the other end meanwhile had slowed down his run rate dramatically as our spinners bowled accurately.

Young Sharma came in at 6 took up the attack with Umarr and kept up with the run rate as Graces fielded well – Umarr reached a fine century and surely wanted to bring the hosts home until he played over a straight ball from Ari and was bowled for a classy 103.

The score was now 194 for 5 after 31 overs – we were still in with a chance. However number 7, Norman , had different ideas with a big 6 into the sight screen helping to win the game with only 3 balls remaining!

Thankfully the bar was open and after a hot afternoon fielding a cold (alcoholic!) drink with the opposition was overdue

Next week we’re at Broxbourne sadly without our contingent of tennis players who are at a tournament in Zurich!