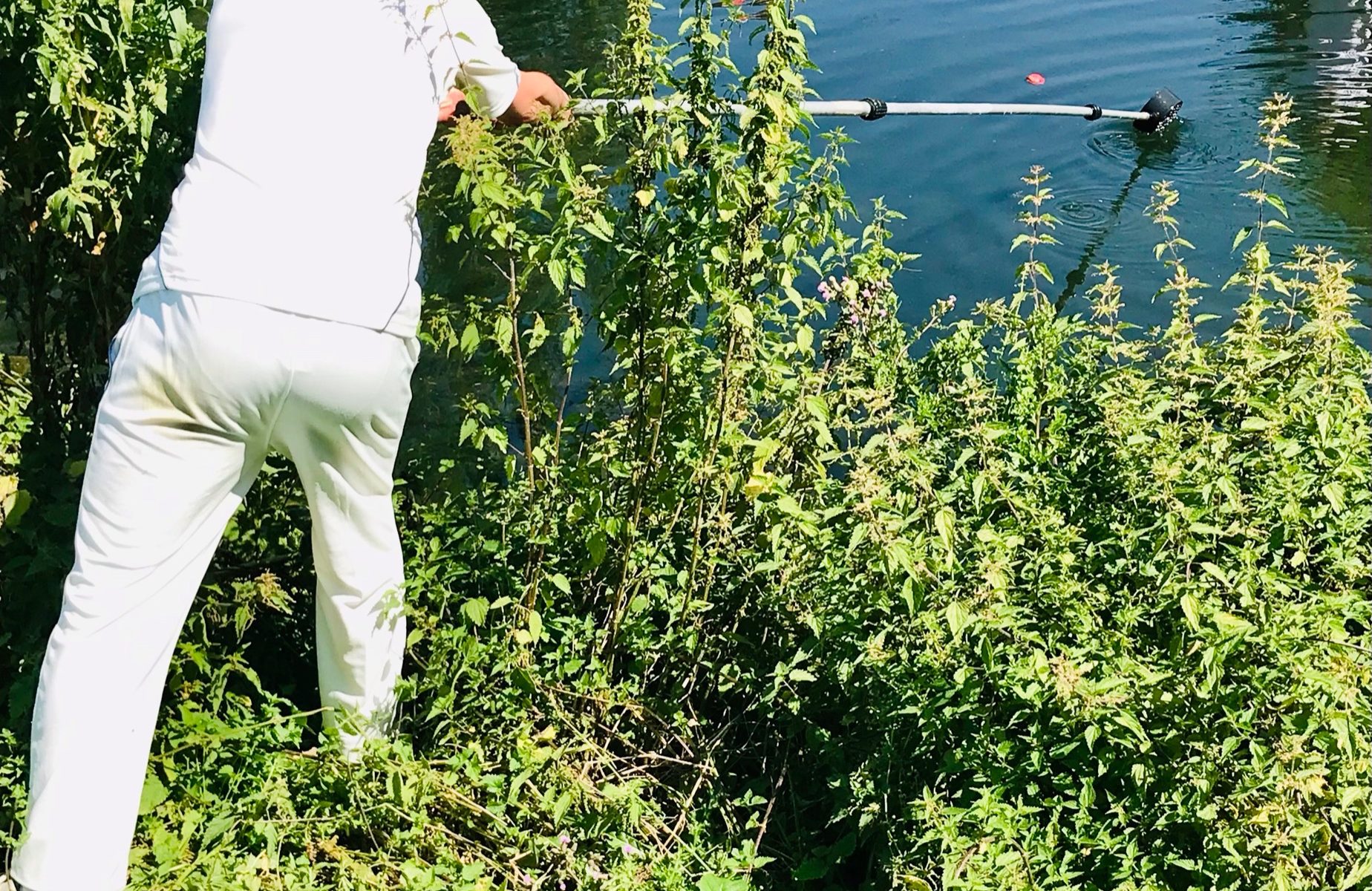 Blazing sunshine and the temperature pushing 30 welcomed us as Graces hosted visiting skipper Jack and his friendly team from I Don’t Like Cricket Club at Broxbourne.

First a big thanks to Ivy for scoring for us as well as our ever loyal supporters including Jim , Raife , David and paparazzi Phil!

Mahender skipped as Stuart and Manish were away – we had a few late drop outs so Robert made his 6th(?) appearance for us – Broxbourne kindly supplied 15 year old colt Freddie to take us to eleven. We also welcomed newbie Mark.

The toss lost Graces were pleased to not have to bake in the field as Jack chose to bowl first – not sure what his team thought! Two of our guests were delayed so we helped out with sub fielders – Mendis and Michael opened our innings – Mendis was soon LBW in the third over bringing youngster Freddie in – he’s apparently a cricket nut and will turn out for us whenever needed!

Together these two batted very responsibly taking the score to 63 in the 16th over – the two delayed visitors showed up after a few overs and they turned out to be the main bowlers so Jack had had to juggle his attack around. The strip at Broxbourne is very true so bowlers have to work hard to get wickets – over the afternoon 9 different guest bowlers were used conceding a very generous 44 extras including 26 wides!

Freddie was eventually LBW bringing Matt in (63-2) – Freddie had hit a nicely timed six into the canal which landed with a satisfying splash just out of reach of the fishing pole despite skipper Jack’s best efforts – the stinging nettles on the bank are in dire need of cutting back so taking care is essential when attempting to recover cricket balls from the water way!

Michael was eventually bowled for an attractive 32 including some classy cover drives (91-3 after 22 overs) bringing Newton in at 5. Matt continued his good form scoring 29 before falling LBW – in one bizarre over he was dropped twice by the same fielder in the covers playing the same shot! (the ball coming out of the sun was blamed!) Naturally the visitors were very sympathetic with their teammate! Our guests have a great attitude (including taking the mickey out of each other mercilessly) and they are enjoyable to play against.

The score was now 131 – 4 in the 28th over as Ari joined Newton. These 2 then took the attack to the bowling with Newton eventually being well caught on the boundary for a quick fire 35. (167-5) Mahender then joined Ari keeping the scoreboard turning over as Ari reached his 50 taking our final total to 228.

The outfield was fast and IDLCC had done a lot of chasing in the heat – Kit and Vikram were the pick of their bowlers.

The BYO tea was taken in the welcome shade as the band struck up in the nearby marquee featuring all your favourite 70s and 80s hits!

Ari and Newton opened our bowling attack and our guests were soon regretting batting second as 5 wickets fell in no time at all – 31 for 5 after 11 overs. Ari was on a hat trick ball at one point.

The lower order batsmen needed to come up trumps after this disastrous start and there were some entertaining knocks from them including a splash down 6 into the canal.  Skipper Jack looked good for a nice 25 , Vickram followed up with 2 sixes and Chris Brightwell in at 11 was not out with 24 off only 15 deliveries.

Another highlight was Mahender taking an astonishing one handed caught and bowled.

The final reply was 154 all out in the 32nd over – our visitors had gone down fighting and the spectators had been thoroughly entertained.

The wickets were shared around with 2 for Ari , Newton , Mamun and newbie Mark.

During the apres match drinks and pizza the cricket podcast hosted by Jack and his teammates was discussed – a highlight being when David Gower (helped by red wine!) guested. Check it out if you haven’t heard it.

We look forward to next season’s fixture

Next week it’s back to the league