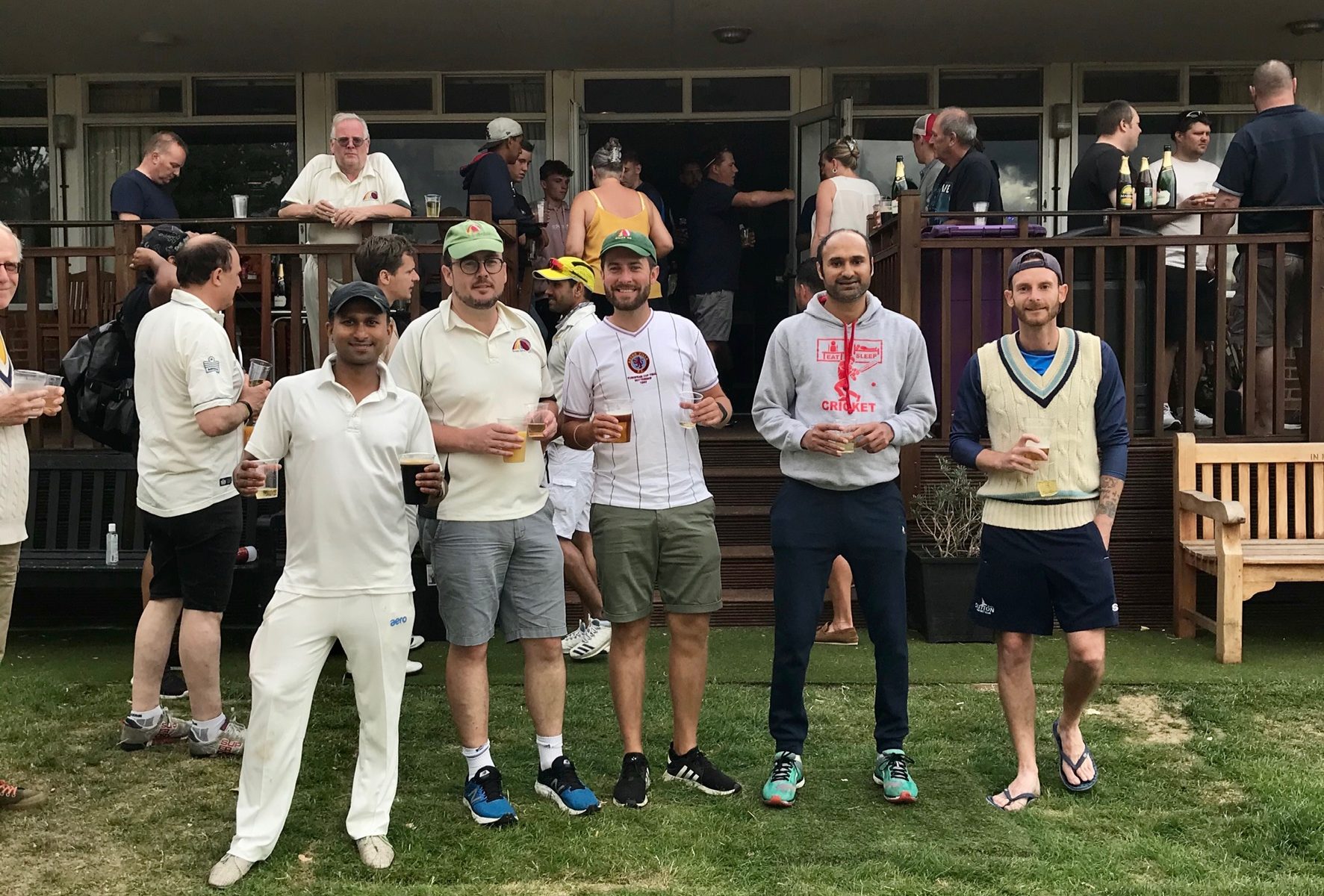 Graces sunk as the balloons rise!

Graces travelled south to the outstanding Sutton CC ground to take part in the annual memorial match to celebrate the life of teenager Joe Lunn who scored a sparkling century against us only to succumb to a rare cancer on his 19th birthday. It’s a privilege for us to be asked once more to be part of this special day.

Thankfully the weather smiled on us this year after the rain last season – as ever we had a fine turnout of supporters and special thanks to Rob for his meticulous scoring for us as well as Mark for umpiring all the game.

By mutual consent our hosts batted first – sometime Grace Sam Schofield captained the as ever youthful Sutton team.  Openers Gardner and Griffin set off at a galloping rate against Newton and Chris – 29 off 3 overs – a nice change of pace saw Chris bowl Griffin for 12. “Bunter” Clarkson in at 3 also attacked until he was bowled for 15 by Newton – 54 for 2 after 7 overs.

This turned out to be our only success for what seemed ages as George Duckworth in at 4 joined Mr Gardner in a display of nicely paced batting that saw us do a lot of chasing on the seemingly ever expanding flat outfield. Boundaries followed aplenty – over 300 looked a possibility until the 31st over when a surprised Mr Gardner was bowled by Jesant for 90. One brings two as Mr Duckworth shortly after cut to Ari at backward point who took a nice catch off Manish. 201 for 4 in the 32nd over.

Sutton finished 0n 263 for 6 after 40 overs – some good bowling in the last 8 overs saw our hosts reigned in from scoring a mammoth total. Manish and Newton picked up 2 wickets each.

Joe’s grandmother had prepared some hearty pasta for the players and spectators which went down well. Joe’s sister Ameilia also went round with a tray of cornettos and choc ices which were appreciated. Sutton have a lovely family vibe which adds to the whole experience.

Michael and Ari opened our batting against Sutton’s pacy attack , Michael couldn’t capitalise on a nice start and was bowled for 13 – 20 for 1 after 4 overs. Jesant in at 3 and Mendis at 4 looked good until they both played across the line for 15 and 9 respectively – 74 for 3 after 18 overs.

After this our batting wheels came off in the face of very accurate bowling as no-one could stay for any length of time to support Ari. Only Adam and Newton got to double figures as we were all out for 135 in the 30th over. Ari top scored with 37.

The drinks break took place at the time Joe scored his century and this was also used to launch almost 200 helium filled sponsored balloons helping to raise funds for a cancer charity – his dad is going to run the London marathon! Reports are in of balloon sightings in Belgium and Poland!

So a really lovely day (even though we finished a distant second!) in the glorious sunshine. After the match Graces socialised with our hosts and helped finish off the pasta!