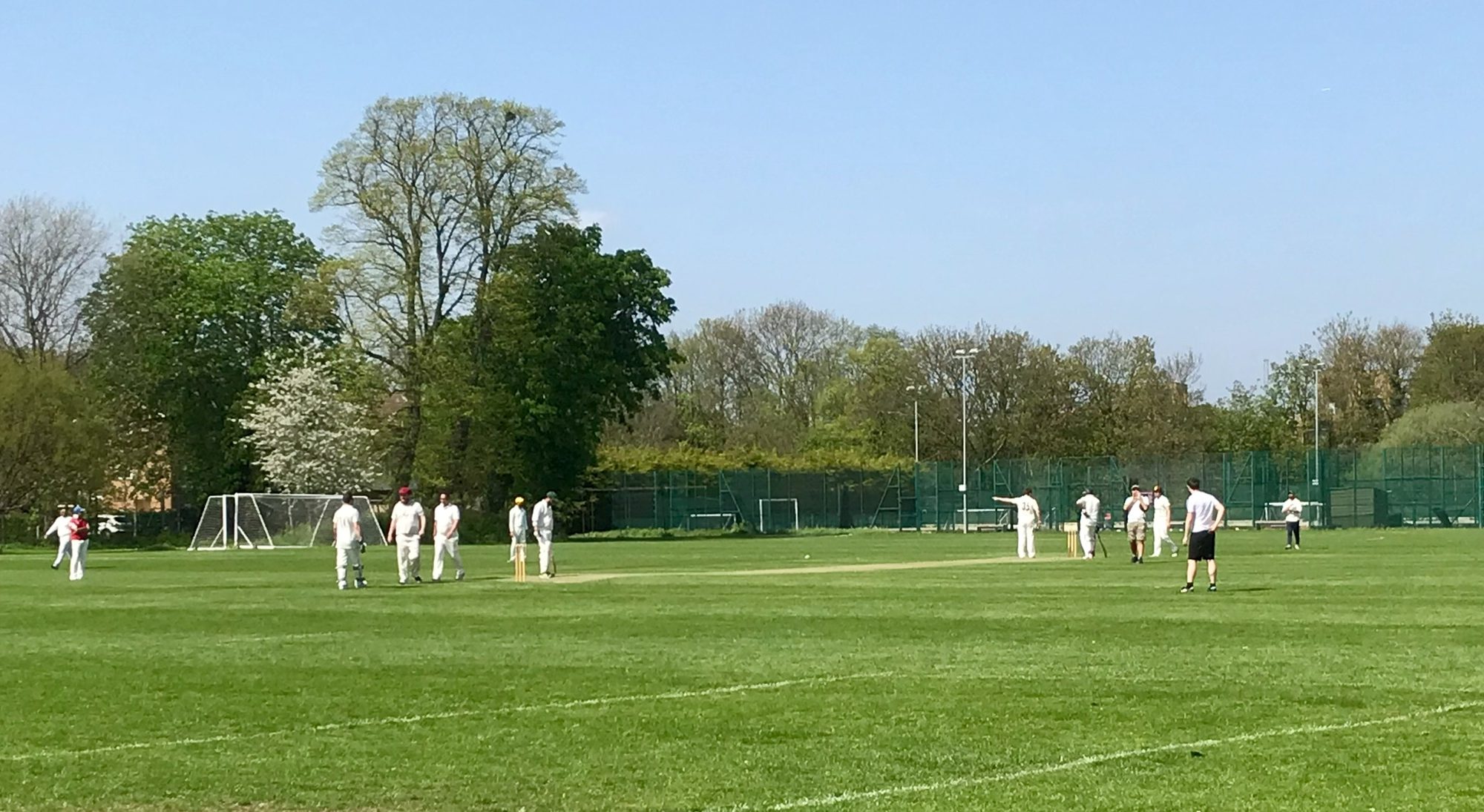 Our usual season curtain raiser entails 2 jumpers and an umbrella so Graces were pleased to travel to south London in glorious sunshine and in the mid-twenties.

Last season Brockley hosted us at a basic park pitch with no facilities but this season it’s a big improvement at the Roan playing fields in Kidbrooke. Half of the Brockley squad were on tour in Malta (thanks to our recommendation!) so Graces were hoping that this resulted in a dilution of their bowling attack which restricted us to only 112 last season when we were well beaten.

After the footballers cleared the outfield Mahender won the toss and had no hesitation batting on a decent looking strip. As ever we had a core of supporters who had made it along.

Dom opened with Sam and they faced an accurate medium paced attack including Rohan – more of him later. Runs were hard to come by but our openers hung on until Dom was LBW for a nice 21 in the 14th over with the total at 48. This brought Mahender in at 3 who immediately changed the tempo going after anything lose taking to score to 82 in the 19th over when Sam was LBW for 9.

Mendis in at 4 continued the attack with some trademark classy drives – Graces were on top now with runs flowing , Mahender hitting a 38 ball fifty before being caught for a very entertaining 57. Mendis was bowled the next ball for 24 bringing Stuart in to join Newton to face the hat-trick ball – 141 for 4 in the 28th over.

Having survived his first delivery Stuart didn’t hang around and a very useful  47 run partnership resulted before Newton was stumped for 31 – 188 for 5 after 36 overs. Manish , at 7 , joined Stuart who was soon caught behind for 15 in the same over.

Brockley’s bowlers had plugged away – Their 5th bowler , Don , put the brakes on in the last few overs taking 4 wickets. Manish ran for everything , eventually being bowled off the last ball after Scott , Jonners and Mamun had sacrificed themselves going for it. Opener Rohan picked up 3 wickets in the last over but a total of 222 all out looked defendable on a true strip.

A nice tea was taken before Graces took the field with Sid and Mamun opening our attack. This contrasting bowling initially kept the runs down until the Brockley openers chanced their arm with some lusty blows – 36 off 8 overs. Manish and Newton were first change – Manish bamboozled their number 1 (Darshan) bowling him for 11. This brought Rohan in at 3 (their opening bowler) who immediately showed himself to be an all rounder with some well timed drives punched to the boundary.

In the 13th over the other opener (Dunphy) was caught behind by Scotty off Sid for 25. The Brockley number 4 soon followed for a duck – caught by mahender off Manish – 55 for 3 in the 15th over.

Brockley looked like they were wobbling but Rohan stepped up with a range of attacking shots keeping them well in the game. Mahender bowled their number 5 (Alex) for 24 in the 26th over with the total at 104. Two quick wickets (133 for 6) brought the host’s genial skipper , Michael , to the crease and together with Rohan punished anything loose keeping them close to the run rate. At this stage Rohan was clearly running out of energy as his timing was failing – Mamun’s second spell in particular putting the brakes on the runs.

Mahender produced a great throw to run Michael out for 22 in over 38 – 193 for 7. Before this Graces were still aware Brockley were still in the game but now the rate was now too high and even exhausted Rohan couldn’t hit the necessary boundaries finishing the match on 95 not out.

Manish picking up 2 wickets for 20 runs in 7 overs was our best bowler.

So a great win in an entertaining match against friendly opposition.  A great start to the season – now it’s the tour!