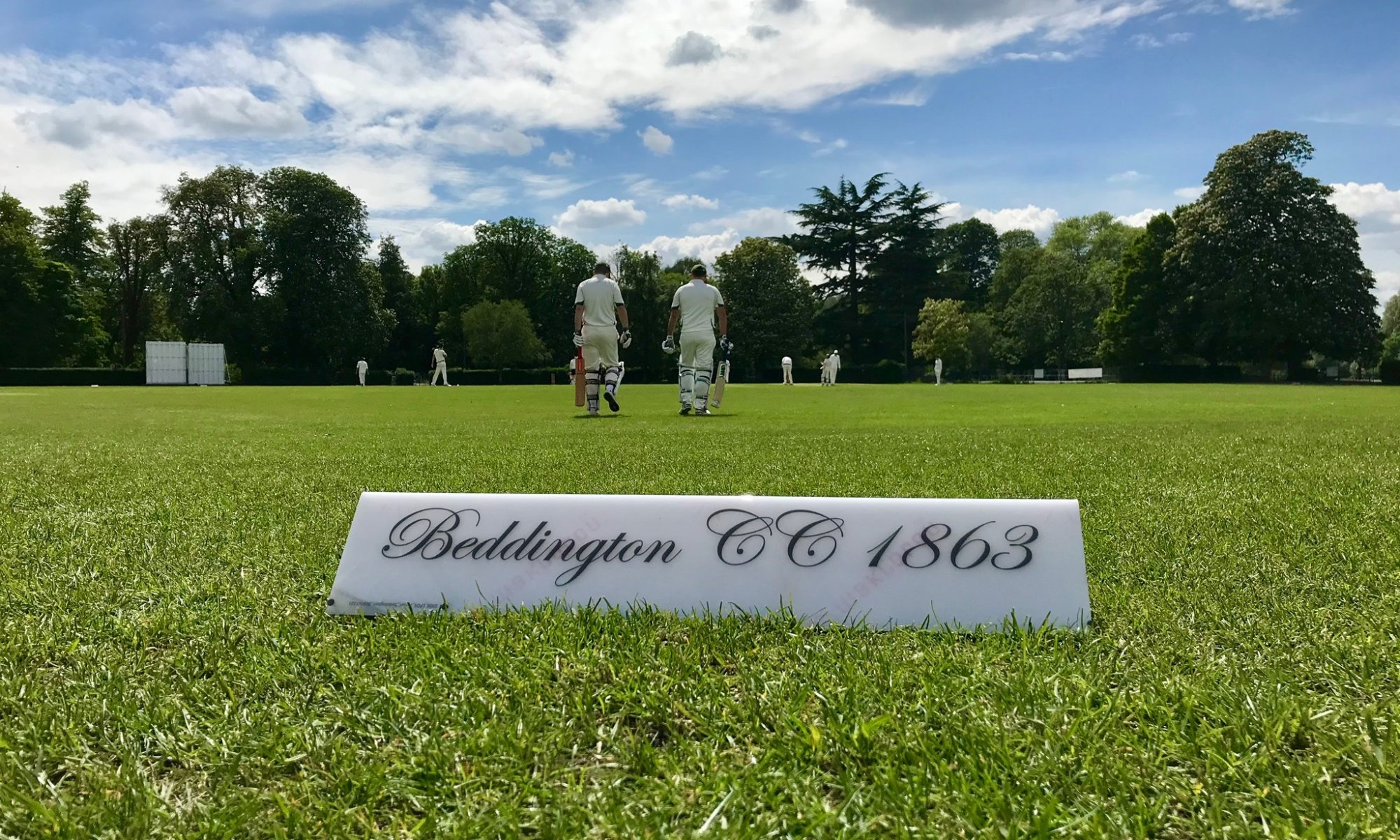 So we’ve found alternative opponents Beddington who we’ve played many times before.

The age range illustrates the appeal of Cricket

Our journey this week was to the better pitch at Beddington, with boundary markers like dinner place names. Our original opponents Alleyn’s Ad Hoc are having remedial work done at their pitch and were not able to find alternative location in good time. We have played often at Beddington but this season had not yet got a confirmed fixture until they too were looking to see if anyone would come visit. Their team was a few older hands but included many young colts. We, through sudden changes to availability, were one short and they loaned us young Owen as a bowler.

From a damp Saturday the weather was steadily improving and it became a fine early summer afternoon with plenty of bright light and a light breeze. A lovely setting enhanced by hearing the campanologists pulling later. Many times we have played timed formats here but today would play 40 overs. Having lost the toss we were to bat first, which is often our preference. Leo and Scott were openers facing Green and Soane with a very small 14 year old Tom Wilkins at Wicket Keeper. A measured start peppered with strong drives took us into the 10th over and we remarked, foolishly, that with the latest boundary Leo had now matched his last week’s score of 30 yet he was now caught at Long On and Scott was caught on reverse sweep for 7 in the next over. Mendis and Mahender were now at crease and Miller had started his bowling. The slips were in close and quite a contrast with Ray at 73 years old alongside 14 years old and one of these secured Mahender quite early on.

Dom was next in and anchored firmly with Mendis who was steadily accumulating. By drinks at 20 overs we had reached 77 and young Joe Ridley had just commenced his spell. In his third over he induced Dom to go for a long shot which was well caught and then cleanly bowled Mendis on 25. Our new pairing was Stuart and Niroshan in his first game of this season. This started well but Ridley bowling again saw Stuart caught in the slip by Captain Dave for only 7. Still Jonners was now in to keep the score rising, chipping away to reach 15 by the last over but he was run out after a late decision to run while Sheth was bowling. This brought Mamun into play but he would never face any balls and Niroshan was also run out for 24 on the last ball. We had at least set a moderate target by scoring 136 ( inc 22 extras).

After a fine tea which is usual here, our guest young Owen opened the bowling and showed good pace and line. Scott kept for the first 20 overs with Niroshan taking over for the remainder and only conceded one bye each in the innings. They opened with familiar face 73 year old Ray and Harry Gardener who had bowled 4 overs economically late in our innings. Tight bowling including a maiden for Owen took to a score of 8 in the 5th over when Harry was stumped for being well out of his ground, a lesson to learn. Sam was now bowling a full session and would take young Wilkins LBW in the 8th, a Wicket Maiden.

Captain Dave in to steady the ship but the rate was very low and just as Ray began to hit out, he was easily run out while Sam was bowling for 13. At drinks at 20 overs they were 43 for 3 , some way behind thanks to Sam completing his spell of 8-2-15-1.

After the refreshments, Dave was caught behind off the bowling of Owen for a mere 16. Next to fall in the 28th was Anson, over enthusiastic and run out while Mendis bowling and in 31st was Sheth for 11, a typical deep catch from Stuart off Mahender. Still only 80-6 with 9 overs remaining. There was however Tan Faysal , a Bangladeshi lad recently starting to get games with Beddington and who had travelled on the same train as Dom, Jonners and Colin now coming to the crease. He had bowled furiously towards the end of our innings. He soon put power into drives and upped the rate. If he could stick around there could be a close result as our run rate was slow in our last ten overs. Five boundaries soon notched up and another looked a definite cert but Scott moved over well at Mid Off and held the catch firm into his chest. 34 scored in 27 minutes meant there was some chance of catching us but the remainders were tailenders. Mahender bowled Miller that same over then Mamun took a fine catch at Mid On to finish Ridley off Mendis. Green had to face Mahender and was efficiently stumped after 4 balls which meant Soane had never faced and we were victorious by 21 runs.

Before some more detailed stats, I would like to mention that Jason Groves was the sponsor of this week’s matchball. This support from our wider members and friends is appreciated. If others wish to sponsor for future weeks, please contact Leo, Mahender, Jonathan, Colin or Nadeem or a player/supporter you see frequently.

Our field and bowling once again secured this victory with teamwork and covering throws to avoid undue giveaways. With strong leadership and bowling of 7.4-1-23-4, the team told Skipper he was man of the match. We have passed on credit to guest Owen for his 8-2-16-2. All bowlers were economical and with good knocks from Leo, Mendis, Niroshan and Jonners we set a target we could defend.

One of the strengths of the young team today was their accurate returns and direct hits to wicket. There was one occasion Niroshan had to hurl himself forward to beat the accurate response with Stuart another so close to run out. Mendis was dropped just before the break and there was one humourous moment as Ridley must have got his spikes stuck and flew over as fast as his bowled ball but any laughing was wiped out with his double wicket maiden in the next over.

Next week we are hosting at Winchmore Hill and invite regular opposition Pacific. This will need us to perform well again and set us up for our invitation to Barton Seagrave in Northants, a bonus from Publicity last year. We will also be at Barnes on Bank Holiday Monday for a 20/20 Tournament. Good prospects for our welcome supporters. Robert was solitary this week but most weeks we are usually cheered on by many more supporters who help to create a great atmosphere for us and usually than our opponents muster.