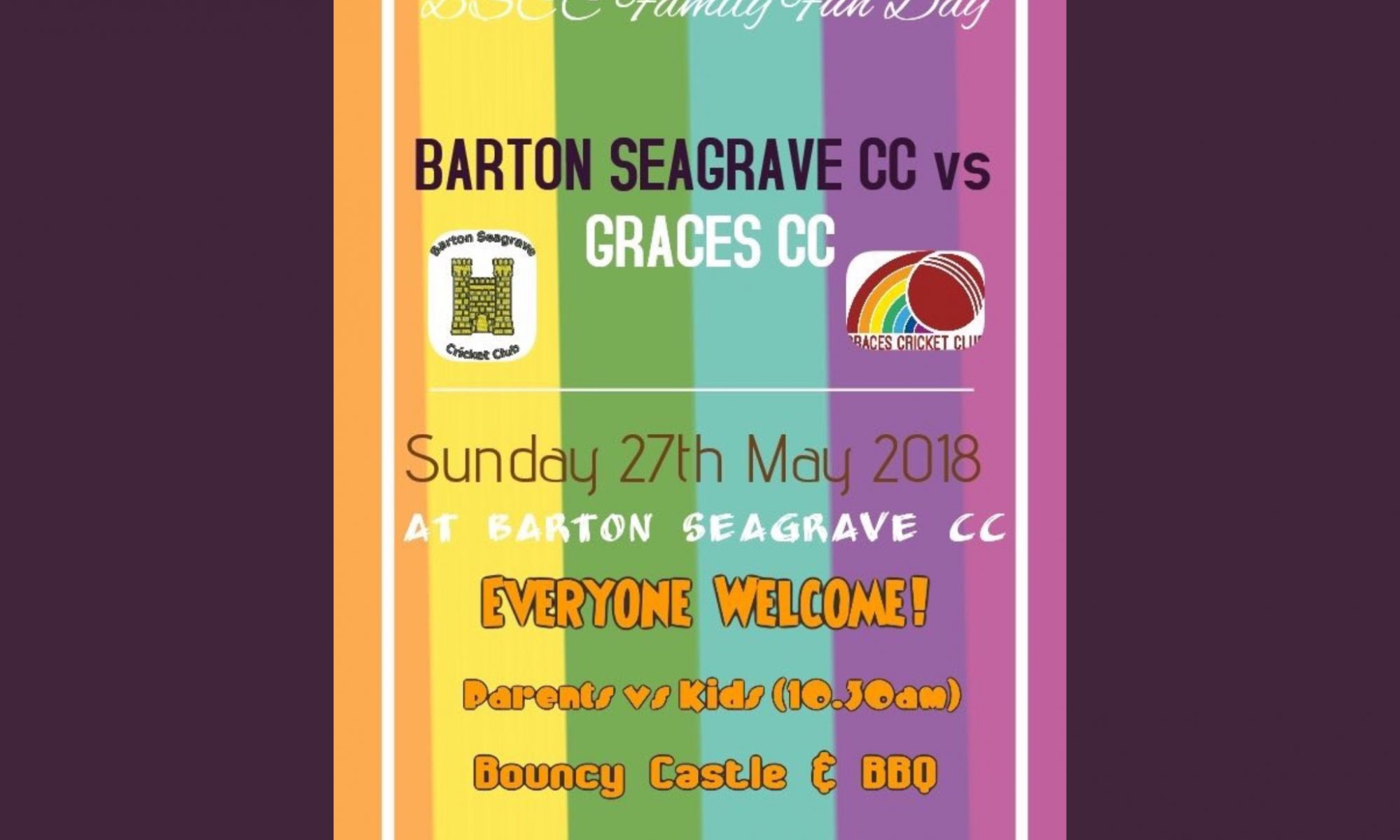 BSCC invited us up after seeing us on Sky TV!

All are welcome to come along!

Graces made their way up to the midlands in a convoy of cars to play Barton Seagrave fearing the worst as thunder storms were forecast. We were lucky as they skirted our match and it stayed hot sunny and humid all day despite nearby Northampton being flooded!

Matt from our hosts had spotted our Sky Sports feature last summer and invited us up to play – a new venue for us. They have a very cute picturesque ground on a slope overlooking an ancient church and woods. They have a low boundary fence and any sixes end up in nettles in the bordering cow field! A first for Graces was a bouncy castle (did anyone have a go?) , balloons along with some juniors training run by Matt. A lot of home supporters had come along for our visit and it was a festive afternoon. We also had a great turnout of supporters as ever.

The toss lost Mahender opened with Stuart and Jonners against a young attack. Jonners couldn’t resist a wide one succeeding in giving a low catch to point bringing Leo in. Stuart was smartly caught at slip for 9 so we were wobbling a bit at 18 for 2 after 4 overs. Mendis then joined Leo and played a mainly supporting role on a green sloping strip – the hosts kindly advised us to play forward!

Leo then took the attack to the bowlers with a range of powerful drives punishing anything loose and our score accelerated accordingly. Mendis played some of his classic drives before he was LBW for 10 in the 14th over – 84 for 3. Skipper Mahender came in at 5 taking the score to 97 before Leo was run out for an entertaining 50 continuing his fine early season form.

The skipper was soon bowled for 7 so Manish and Niroshan paired up. They took the score to 138 before Niroshan was runout for 18 in the 27th over – 6 down. No one was able to hang around with Manish who was batting well with lots of quick singles and some nice boundaries and we were all out for 180 in the 37th over with Manish eventually being caught for a quickfire  45.

The hosts had bowled and fielded very well with their scorer’s (Catherine) 13 year old son enjoying his bowling spell.

During the fine tea Graces had time to rue not lasting the full 40 overs – would this come back to bite them once more?

Our contact Matt (his husband Rees manned the BBQ) opened the home team’s batting and showed some class with some stylish drives taking their score to 55 in the 16th over Mahender taking a great caught and bowled chance.

Veteran Ash in at 3 enjoyed hitting everything to leg side until he was caught by Rich for 28 – 113 for 2 in the 22nd over. 2 more quick wickets brought us back into the game after it was starting to slip away from us – 115 for 4 after 23 overs.

The game was now nicely poised and then continued to seesaw as runs were hit and wickets were taken – after 36 overs the score was 160 for 9. 21 needed to win with just one wicket left!  Unfortunately for us their number 2 had retired after hitting 40 and returned to the fray at 11- their number 10 was wearing shorts and a T shirt and had apparently been press ganged into batting but knew which end of the bat to hold!

In a very tense and exciting spell singles were taken with the odd boundary hit until the last over saw them needing just 5. Four runs off 5 balls left 1 to win from the last ball – this was hit hard at Manish in close – he got his hands to it but couldn’t hold on as the batsman scampered the winning run. So a loss by one wicket off the final ball in a remarkable match – I can’t recall Graces being involved in such a tight finish before.

We then enjoyed  Barton Seagrave’s hospitality presenting them all with Rainbow Laces and a Graces shirt as mementos of the game. They would love to repeat the fixture in 2019 – so watch this space!