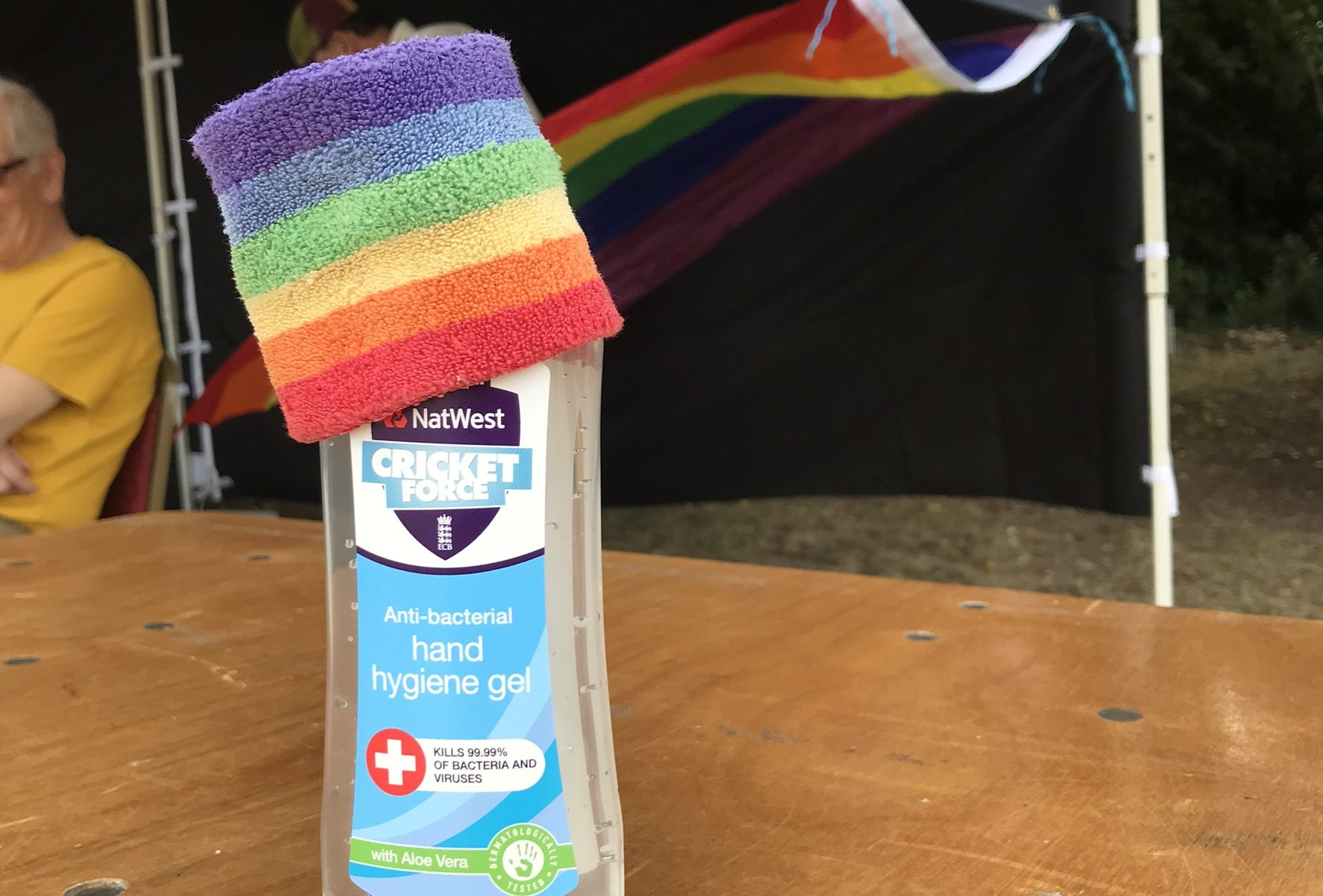 The curse of the wishing well…

Sunday 30th August and a trip to the beautiful Botany Bay CC for a friendly fixture against Hadley Wood CC. Some of our South London players had to set their alarm for the journey to the rural outskirts of North London but the quaint ground is well worth the trip and the team were hopeful to recreate their victory of last season. Despite the long journey it was great to see a number of supporters make the trip including new followers Andy from Herne Hill and Adam’s friend Jim from Chelmsford.

As we inspected the pitch, opposition captain Saif revealed that he hadn’t won a toss all season; conversely Graces had won them all, so this was only going one way right..? Yep, Hadley Wood won the toss and elected to bat first on a whiteish pitch that was just a little soft underfoot; not a bad toss to lose perhaps?

Ari opened up with the ball and didn’t have to wait long for success as Iqbal, not fussed about ‘having a look’, drove on the up straight to Mahender at cover; a platinum duck and Hadley Wood 0-1! Ben Steele joined Saif and they cautiously set about seeing off the opening pair of Ari & Mahender, successfully taking the score to 25-1 after 8 overs.

Time for some spin and Jesant the star from last week, who was also on a hat trick, was introduced to the attack. Steele, knowingly or otherwise, saw off the hat trick ball but Jesant wasn’t to be kept waiting and had him lbw for 11 four balls later, and Saif bowled for 13 in his next; both guilty of playing back to fullish deliveries. The score, 33-3 after 11 with Jesant and Mamun bowling beautifully and building pressure.

With Hadley Wood in need of a partnership, Sha & Chetan (in at 4 & 5) looked keen to step up and having seen off a tough spell, including a few fine boundaries, it was guest player Rob who was brought into the attack. Rob had impressed in the field and he slipped straight into it bowling a tight line and punished only for dropping the odd ball short. Meanwhile Mamun had switched ends and in the second over of his new spell he had Chetan caught by Ari at gully; Chetan had looked in good nick so this felt like an important breakthrough as the score moved on to 67-4 in the 19th over.

As Mamun continued to impress with a wicket maiden followed by a maiden, returning player Sam joined the attack and was straight into his customary variation following up a no ball that bounced four times with a flighted full toss that bamboozled the batsman, dipping and crashing into the stumps! Sam I’m calling it pure genius but Sha wasn’t so happy and trudged VERY slowly back to the pavilion with the score 72-5 at the halfway stage.

Josh Steele and Ishmael were now at the crease and as Steele looked to take the attack to Mamun he skied a full toss to Captain Stu at long off who took a regulation catch* and HWCC were in trouble at 79-6. Here followed a sensible 13 over spell from HWCC as Ishamel and Nee, looking to consolidate, rotated the strike well and moved the score along to 126-6 from 36 overs. The partnership even saw off a rare spell from Chairman Leo who bowled a tidy 3 overs before being replaced by Dom for what was also his first bowl of the year.

It was Mahender who eventually broke the partnership with Nee skying another catch to safe hands Stu at long off and Dom quickly followed this up with the wicket of Tahidul off only his fifth delivery; Ari taking a neat catch at square leg. In the penultimate over Ishmael was sold down the river at the non-striker’s end and was well run out by Jesant & Mahender for 28 as the score reached 133-9 with one over left. Dom bowled the final over of the innings and despite conceding no boundaries HWCC moved their score on to 141-9 from their 40 overs.

Despite the pitch being a little tricky it was Graces who were the more buoyant at the halfway stage after a fine effort in the field with skipper Stu setting the standard. Would 141 be competitive? As the sandwiches, teacakes and battenbergs were devoured the feeling was, probably not.

Stu and Mahender strode out after the break and after a decent first few overs, with Stu looking in good nick, he played around a straight one and was lbw to Saif for 9; 17-1 after 4 overs. This brought the in-form Jesant to the middle and the two looked to play sensibly, not bothered by plenty of dot balls they dispatched the rare loose ball to the boundary and took the score past 30 in the 7th over. Meanwhile Saif was bowling well and into his 4th over it was a low full toss that did for Mahender, who looking to dispatch the ball to the boundary skied it to mid off off the toe of the bat; 31-2 in the 8th over as Dom joined Jesant in the middle.

HWCC are notoriously lively in the field and with his tail up and into his 5th straight over Saif got one to pop off a length and Dom was unlucky to glove behind for 1. Saif completed a wicket maiden and his team sensed an opportunity as Ari strode out; the score 39-3 after 10 overs.

With the low target and plenty of overs left, sensible batting was all that was required and this is what Ari & Jesant set about doing; both looking good as they took the score to 80-3 at the halfway point; Graces looking comfortable. Tahidul, who was finding plenty of turn, continued for HWCC after drinks and he was joined by left armer Chetan who quickly found his rhythm and plenty of swing as conditions became more overcast. As the duo looked threatening Tahidul was finally rewarded in his fifth over (the 24th of the innings) snaffling the prized wicket of Jesant, caught behind for 46 and completing a wicket maiden with Jonners seeing out the over. With his confidence high Tahidul followed this up with another fine over and had Ari lbw for 24. The score 95-5 in the 26th; game on?

In at seven today was Scotty and with two new batsmen at the crease HWCC were in high spirits looking to pounce on any opportunity. Alas they weren’t forced to wait too long as Chetan continued to find plenty of movement in the air Jonners was clean bowled for a duck and in his next over Scotty was caught off a leading edge looking to turn the ball into the leg side. Rob joined Leo in the middle with the score on 96-7 in the 29th over and Graces position looking rather precarious. Rob successfully let a few deliveries go by but after a sequence of dot balls he was stumped for 2 in new bowler Iqbal’s first over and Graces were 8 down with the score on 107; 35 runs still needed. All eyes were on Leo by this stage and when he launched a trademark 6 down the ground in the 32nd over the away fans perhaps sensed there was still hope. It wasn’t to be for Leo though as he was clean bowled by an inswinging yorker from Ben Steele and any hopes of last wicket heroics from Sam & mamun were scuppered when Sam suffered the same result, bowled by Steele for 2 and Graces were all out for 121.

The final 7 wickets had fallen for 31 runs in what was an almighty turn around for HWCC and a collapse that Graces will be happy to forget. Thankfully the Robin Hood pub round the corner was still open to wash away that final hour and enjoy some merriments in the company of HWCC veteran David Turner.

One unique feature of Botany Bay CC is an old well just outside the boundary which some say will bring you good luck; Jonners, Dom and Scotty all put money in the well but with 2 runs between the 3 of them we’re not sure the rumours are true! Or perhaps it takes 24 hours… it was after all a bank holiday weekend.

Next up a return to the wonderful Winchmore Hill CC for a friendly against regular opposition Judd Street Tigers. Last season this match saw a narrow victory for Graces in a high scoring match. Until then…