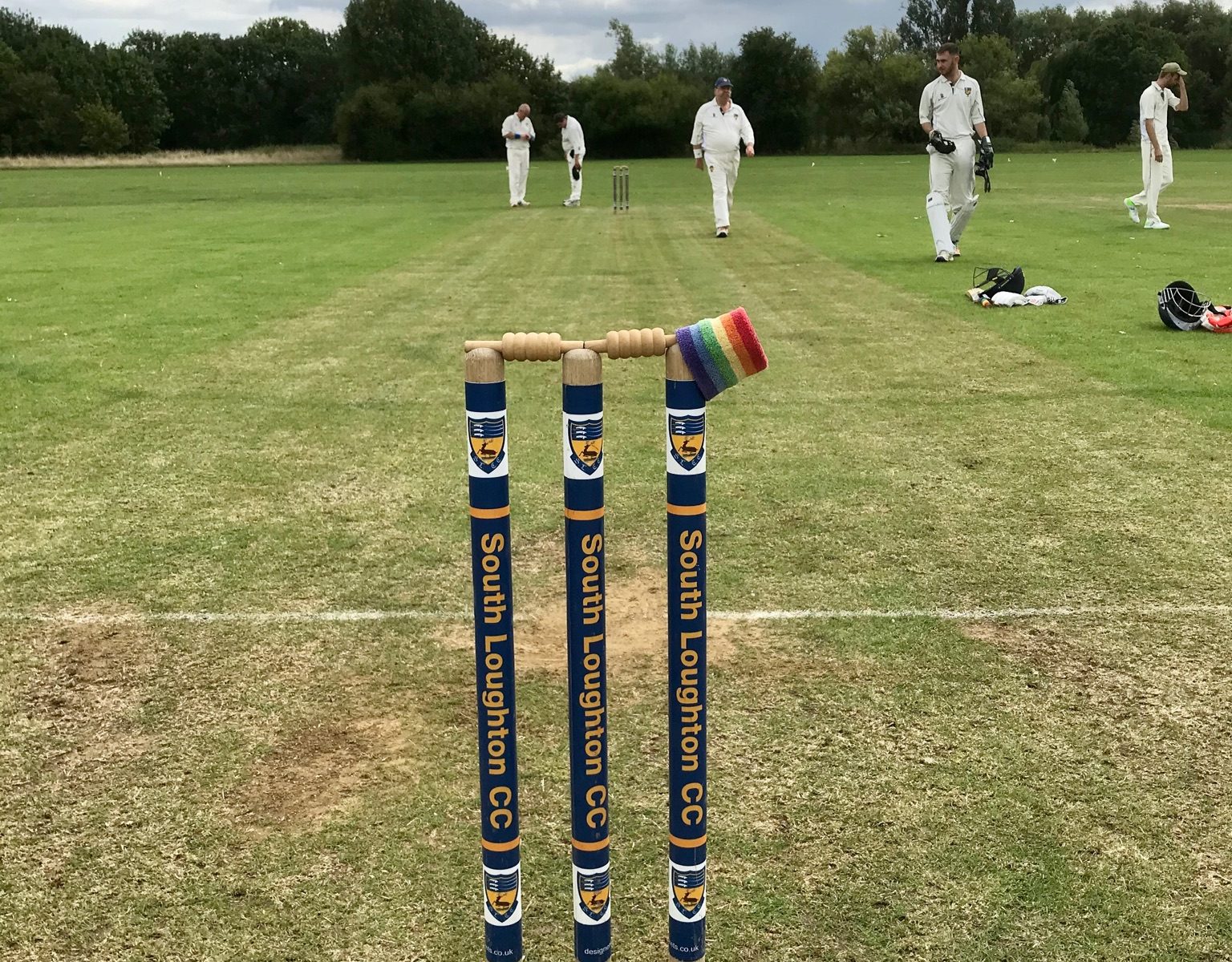 Thanks to Adam for this match report;

Sunday 23rd August 2020, time for Graces annual excursion to deepest Essex and to our friends at South Loughton CC. After a spell of inclement weather, including a washout last week, the outfield looked slow and the pitch green but it wasn’t enough to stop Stuart electing to bat first having won the toss; that’s 100% success rate with the tosses so far this season.

Cher’s ‘If I could turn back time’ was blaring from the invisible speakers as Stu & Leo walked out to open the innings looking to recreate some fine partnerships of seasons gone by. After a steady few overs to open up a ball from young seamer Lloyd Mann reared off a length and took the shoulder of Leo’s bat; caught at gully for 5.

This brought leading run scorer for the season Mahender to the crease, who demonstrated what a tricky pitch it was to time the ball on. Despite this Stu and Mahe kept the scoreboard ticking over with the latter adding a couple of swashbuckling boundaries before being caught off a top edge at fine leg in the11th over. This brought Jesant to the wicket with the score at 33-2.

By this point Stuart looked to have found some good rhythm and with Jesant playing himself in sensibly they were able to rotate the strike and build a cracking partnership of 56. With the score at 89 and thoughts of an acceleration in the air Stu was caught behind off the bowling of Evans for 30 and Mendis quickly followed; bowled for 2 looking to cut a ball that kept a touch low. Score on to 90-4 after 22 overs and the target of 200 looking a fair way off.

In amongst it all Jesant was looking in good form and was joined by Dom (in at 6) who quickly showed he was happy to be back, both players executing the late cut particularly well and taking the score past 120. After another fine boundary, Dom looking to be aggressive didn’t quite get to the pitch and edged Evans to gully for 17. 121-5 after 28 overs.

Next in was Adam Bray who after a couple of singles missed a straight one and was bowled by Shivanash and Adam was quickly followed by Hiten who was another victim to the spin of Evans, lbw for 1.

With the score on 133-7 Jesant desperately needed someone to stick around with him for the remaining 8 overs and that’s exactly what Scotty set about doing. There was plenty of sensible batting as a much needed partnership formed with Jesant expertly managing the balance of aggression vs undue risk as he took his score past 50. After some flowing boundaries Jesant was eventually caught and bowled by Shivanish in the penultimate over with the score on 170.

With only one over left Jonners promoted the expansive Mamun ahead of himself and a strong final over took the total to 178-9. The feeling amongst the ranks was that on a sticky wicket this was probably around par and that it would likely be another close match!

After an array of home cooked teas and a few beers from the bar Hill and Farthing; two of the younger opposition players, walked out for SLCC and in Ari’s absence, our very own Dhaka express (Mamun) opened up with Mahender. It was a fine opening spell from both and though no early wickets fell you could feel pressure building, especially on Hill who had only managed 8 runs from 23 balls.

Mendis and Jesant took over the attack and in his first over Mendis had Hill brilliantly caught by Stu running in from long on and followed this up with Sam Davey (in at 3) caught behind in his next over. A great little spell for Graces and SLCC had moved on to 35-2 after 11 overs.

Shivanash was in at 4 and after a rain delay he linked up with Farthing who had been batting nicely. They looked to be constructing a decent partnership but having hit Jesant for a 4 and a 6 Farthing had a rush of blood and played one big shot too many. He was well caught by Mendis at long on for 45 as the score moved on to 70-3.

Next in was the young Seb Ali who looked effective and the SLCC ranks began to recount how these two batsmen had led their team to victory in their previous three matches… would they make it four?!

Clearly having a good understanding of each other the two batsmen set about their task well, looking to rotate the strike and put away any loose deliveries as they and saw off spells from Hiten and Adam Bray and built a partnership that passed 60. As they looked to be cruising Stu brought back Mahender for his second spell; this time his traditional spin. It proved a great decision as Mahe picked up the young Ali; bowled for 23 in his first over. Graces sensed an opportunity but SLCC were still favourites requiring 44 runs with 10 overs and 6 wickets in hand.

In at 6 was Josh Evans who buoyed from his fine bowling performance steadied the ship and when Shivanash passed 50 SLCC looked on course and Graces looked in need of something special. The Dhaka express was back but had reverted to his usual action and after a couple of very economical overs their was some confusion between the batsmen as they looked to pinch a single and Mamun pounced to run out Shivanash off his own bowling. Game on!

With 18 required from a little over 3 overs you could feel the tension as Luke Hill walked out at number 7. Mendis was into his final over by this point and as the batsman looked to target the long off region Stuart took the decision to move himself to there. The stars aligned as next ball Evans hit it high into the air and Stuart took the catch!

Mann strolled in at 8 and although the run rate was still very achievable, with wickets falling the pressure looked to be telling on the lower order batsmen. With the game in the balance Hill went for a quick single off the bowling of Hiten and as the throw came into the keeper the ball ricocheted off Scotty on to the stumps and on to the square. Desperate for the runs the batsmen tried to steal an extra run but Scotty leapt on the ball and an underarm throw smashed into the stumps at the striker’s end – another brilliant run out and the score to 166-7.

Everyone was well on the edge of their seats by this stage and with 2 overs up his sleeve it was Jesant who Stu called upon to bowl the 38th. It was a good start from Jesant and with only 3 singles from the opening 5 balls the pressure told when Mann, looking to slash the ball into the off side, was well caught by Mahender for 6. With his hands warmed up Mahender was back into the attack with SLCC requiring 10 runs from 2 overs, with 2 wickets in hand. Mahe cleverly rattled through the over and the 3 runs off the 5th delivery were the only from the over.

So after 79 overs of cricket it came down to 7 from 6. Russell (in at 9) saw the first ball off but looking to attack the second he was clean bowled for 5. This brought captain and veteran Andy Battle out at number 11 and as he immediately looked to turn Jesant into the leg side he sent a leading edge to Stuart at mid wicket; gone for a golden duck and it was over in the blink of an eye!

A victory for Graces, another fantastic game of cricket and a hat trick pending for Jesant who’s fine all round performance won him the man of the match award!

Next week sees us return to the picturesque Botany Bay CC for a friendly against Hadley Wood CC. This was a victorious league fixture for us last season. Until then…