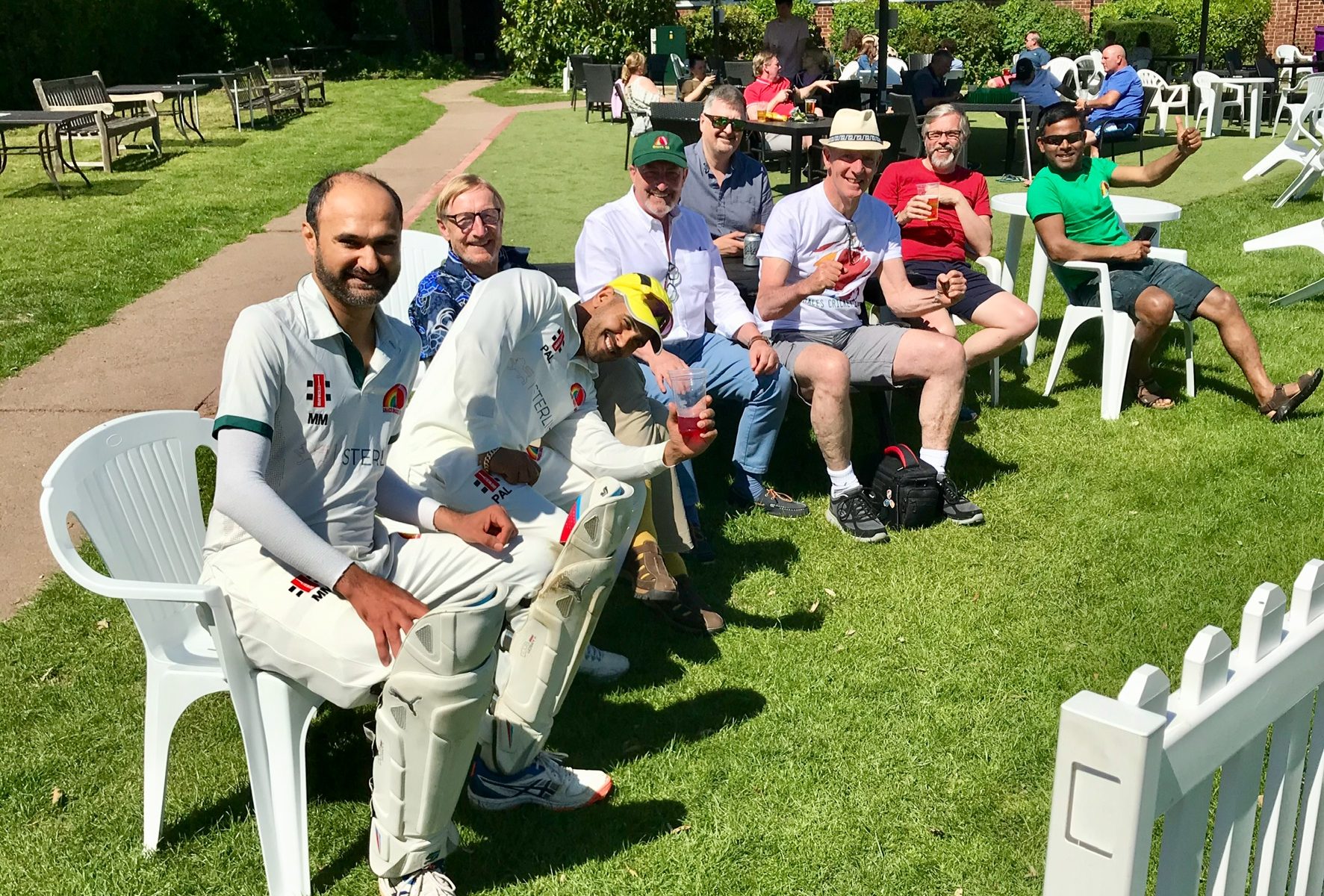 Many thanks to Bena for his match report;

My first match report for Graces!! Hope you enjoy it everybody.

This weekend signalled Graces’ return to league cricket with what was set up to be a hotly contested fixture against the current league leaders, the Stanmore Warriors.

We were met at Broxbourne by overcast yet muggy conditions, with a further chance of some heavy rain moving in during the early evening. So, it was clear that we would be required to work fast in order to achieve our victory and claim our spot at the top of the league.

Stuart won the toss, and with a touch of moisture still in the pitch and helpful overhead conditions for our cohort of seam up bowlers, he decided that it was a bowl first day. Taking the new ball was Newton and Nadeem. Both bowlers got into their work quickly, consistently pitching the ball up in the right areas and giving the ball a chance to swing – which indeed it did. After numerous flirtatious prods outside the line of the off stump, the opposition captain found his stumps unceremoniously splayed, finally playing on after going for one waft too many off the bowling of Nadeem.

Stuart’s decision to bowl first had certainly been vindicated as the Stanmore Warriors found themselves tied down at 24 for 1 wicket after the first 10 overs, with runs looking hard to come by. This early advantage for Graces was pushed further due some courageous spin bowling from Mamun, who, after being hit for some early boundaries, continued to flight the ball and encourage the batters to take on the fielders positioned on the edge of the ring. Unable to resist, their number 3 went for one shot too many and found himself caught out by the safe hands of Jessant.

However, as ever in cricket, there was a shift in momentum as the batting side managed to construct some strong partnerships. At the position of 30 for 2 wickets, the Warriors’ number 4 strolled in, and a combination of bold intent and some remarkable hitting ability saw him get away quickly. In response to this, it was time for Bena and Manish to come on and bowl through the middle overs with the aim of containing the flow of runs. What followed was a fascinating battle between bat and ball which saw balls fly to and over the boundary, but also numerous wicket taking opportunities go begging.

After several lusty blows from the opposition, we eventually began to take our chances and send the dangermen back short of their milestones – Manish picking up 3 wickets and Bena picking up the 1. The score line stood poised at 191 for the loss of 6 wickets. In the last few overs, wickets began to fall quickly as the Warriors tried to push home their advantage but found little success this time in getting the ball away and to the rope. Graces’ opening bowlers came back on to finish the job that they had started, swiftly tying up the innings with stumps cartwheeling all over the place. Both bowlers ended the innings with impressive figures, Nadeem taking 4 wickets at an average of 7.25 and Newton finishing with 1 wicket for only 12 runs off his 6 overs. The Warriors ended with a strong but chaseable score of 206 all out from their 43 overs.

Charged with setting the tone for our chase were Mahender and Adam. Some early positive intent made runs look initially easy to come by, with Adam’s quick hands sending some early chin music racing away to the deep square boundary. However, this early intent would also be the downfall of both openers, with Mahender suffering some serious stump damage after looking for the big “heave-ho” and Adam graciously walking for 18 after nicking through to the keeper. However, in to stabilize this early wobble was the calm presence of Jessant who left expertly as the opening bowlers began to hone in on a consistent fifth-stump line, extracting a fraction of sideways movement as they did so.

Nonetheless, the challenge for Graces was to find somebody to hang around in the middle with the increasingly fluent looking Jessant. Both Kosala and Bena found themselves walking back for not too many after playing some unwise flashes outside the off stump, with Kosala sending a genuine edge to the hands of first slip and Bena placing one down the throat of a neatly positioned third man. Jessant did however, eventually find his partner in the shape of the dynamic and premier allrounder Newton. The two combined beautifully. Jessant’s balance and poise allowed him to pounce upon anything short and wide – continually sending the bad ball delicately away to the rope – whilst Newton’s intent took the attack to the bowlers, on one occasion sending the ball far over cow corner and into the Broxbourne advertising boards. This partnership took Graces from 73 for the loss of 4 wickets, to 166 before Newton finally fell for a crucial 52. Nonetheless, with Jessant still at the crease and plenty of batting still to come, victory for Graces seemed ever closer.

After a minor wobble when Jamie found himself trapped in front shortly after the loss of Newton, captain Stuart came to the crease and instantly ensured that the runs continued to flow with some confident straight hitting which motored the score to 197-6 off 41 overs. With the taste of victory in their mouths, both Jessant and Stuart perished trying to seal the victory in style – Jessant leaving the field for a sublime and player-of-the-match winning innings of 81 and Stuart departing for a more than handy 24. This, however, did not delay the victory for long as Manish and Nadeem quickly scored the final runs required, taking Graces across the line in the 43rd over and securing our place at the top of the league table.

There we have it! A great game of cricket with contributions from the whole team. Big thank you also to all our supporters who showed up to witness this marvellous victory, it was a great day out for all.